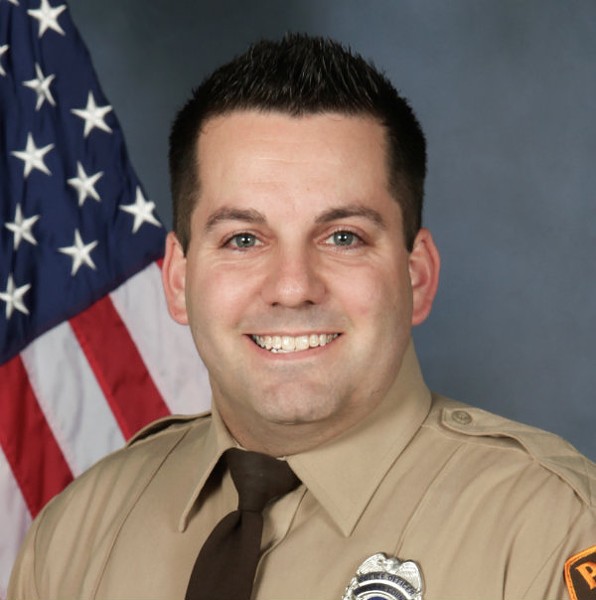 Officer Blake Snyder was responding to reports of a disturbance in Green Park when he spotted the suspect heading from a house to his car. Belmar told reporters investigators believe Snyder told the man to show him his hands.

"The suspect produced a pistol and shot Officer Snyder point blank," Belmar said during a news conference five hours after the attack. "It was an immediately fatal wound."

A backup officer arrived just as the suspect opened fire, authorities say. That officer shot the suspect multiple times, critically wounding him. The suspect was being treated at an area hospital, Belmar said.

Snyder was a four-year veteran of the department. He was married with a two-year-old son. Belmar says he was working out of the Affton Southwest Precinct on Thursday morning when he got the 5 a.m. call to respond to the 10700 block of Arno Drive, which is on the southwest edge of Clydesdale Park.

Police identified the suspect this afternoon as eighteen-year-old Trenton Forster of Affton. He has been charged with murder and armed criminal action. His bond was set at $1 million cash.

Forster was previously arrested by county police in November on charges of criminal possession of a controlled substances. He's still awaiting trial in that case.

Condolences began to pour in after news of Snyder's death was announced this morning.

"We are truly saddened to learn of the tragic death of one of our brave St. Louis County Police Officers," County Executive Steve Stenger said in a statement. "I offer my condolences to the policeman's family, friends and fellow officers."

St. Louis city police officers added black bands to their uniforms, and Chief Sam Dotson said it was with "heavy hearts" his department would be mourning Snyder's death.

Heavy hearts today as we mourn alongside @stlcountypd for our fallen brother. On behalf of the entire @SLMPD, you are all in our prayers.

Congresswoman Ann Wagner (R-St. Louis) said she was "heartbroken" after learning Snyder had been killed.

"He was a true hero, who selflessly put his own life on the line to protect our families," she said in a statement.

Police are accepting donations for Snyder's family through BackStoppers, a nonprofit that assists the families of fallen emergency responders. They cautioned they will not be using other online fundraising sites, such as GoFundMe.

Snyder was the first St. Louis County Police Department officer killed in the line of duty since the death of Sgt. Richard Weinhold in October 2000.