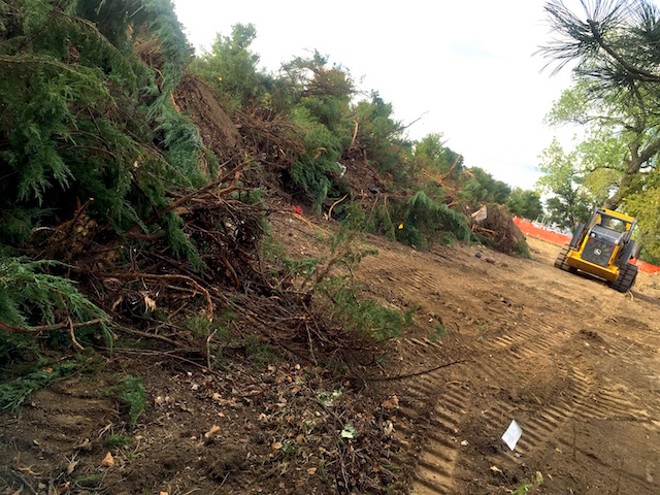 Stephanie and Michael Roberts' bushes were about as big — and as useful — as bushes get. At well over six feet tall, they gave the couple's home a degree of privacy, even though they live right on busy Lindell Boulevard. They were better than a fence — no one trying to get to Forest Park would dream of cutting through the Roberts' yard.

That all changed last week, when crews working for the Loop Trolley Transportation District went to work in the Roberts' yard and unceremoniously yanked out the entire 100-foot-long row of hedges, leaving the Roberts' home completely exposed, bordered only by a patch of dirt.

And that's even though the bushes were indisputably on the Roberts' side of the property line.

In fact, Stephanie Roberts says she had no idea the bushes were being removed until they were already gone. When she stepped outside to greet a relative dropping off her daughter, she and the relative gaped at the carnage — not only were the bushes gone, but the crew had left messy piles of branches and leaves in their wake.

"It was almost something you couldn't miss," Roberts says.

After making a few phone calls, Roberts would learn that it wasn't a crew gone rogue — the workers were acting on instructions from Chris Poehler, administrator of the Loop Trolley Development District. Poehler said he believed he had been granted permission by Roberts' husband in a phone call.

But Stephanie Roberts, who'd heard her husband's side of the phone call, says that is almost unfathomable. She says Poehler merely asked if it was OK to clear out some weeds along the edge of their property. Michael Roberts said sure. The bushes themselves were never discussed.

By that evening, Thursday, Roberts says Poehler was admitting fault. "We basically said this was unacceptable," she says. "You can't replace what you did." The bushes dated back to the home's original owners, she notes. "And they took it out like it was trash."

Poehler promised to be in touch the next day with a solution. When the Roberts hadn't heard back by 9:30 a.m., they called Alderwoman Lyda Krewson, who quickly set up a three-way call.

Krewson confirms that Poehler admitted fault and said he'd be putting two plans in place — one for the short terms, to shield the home from prying eyes, and one for the longer term.

In a statement to the RFT, a spokeswoman for the trolley district said they'd be working to get the matter resolved:


We sincerely apologize for any inconvenience and distress inadvertently caused as a result of the miscommunication with the Roberts family and are working diligently to rectify the situation. We are fully committed to finding a solution that will quickly address the Roberts’ concerns, while also fitting with the master landscape design plan for DeBaliviere Blvd. that is part of the Loop Trolley project.

The project is serving as a catalyst for several improvements along the trolley route that further benefit the community, including several upgrades along DeBaliviere. In addition to the new landscaping, these include reconstructing the 80-year-old DeBaliviere bridge that runs over MetroLink; repaving DeBaliviere - from Delmar to Forest Park - and adding new pedestrian lighting, and partnering with Great Rivers Greenway to extend the St. Vincent Greenway from Ruth Porter Park to Forest Park.

We are confident that we will be able to resolve the current issue in a timely manner and look forward to delivering this community-enhancing project next spring.


But Roberts says she's only grown more concerned as she looks at the plans. They show a bike path/pedestrian trail running extremely close to her property line. She's wondering why no one ever bothered to talk to her family about how they will be directly impacted.

Krewson notes that the trolley district had multiple meetings with the neighborhood association, called the Catlin Tract — and that it's actually the Catlin Tract that pushed for improvements to the lot next to Roberts' house, which is what led to the bushes being ripped out. But she acknowledges that specific neighbors may have been left in the dark.

"I don't know what the outreach was," she says. "I thought there were conversations with adjacent property owners. Maybe there weren't." Of Roberts, she says, "She's an important neighbor; she's the closest to it."

Krewson notes that even though the end of the trolley line is in University City, most of it runs through the city of St. Louis. She says, however, that overall the neighbors' experience seems to be OK. "I am not aware of anything else like this," she says. 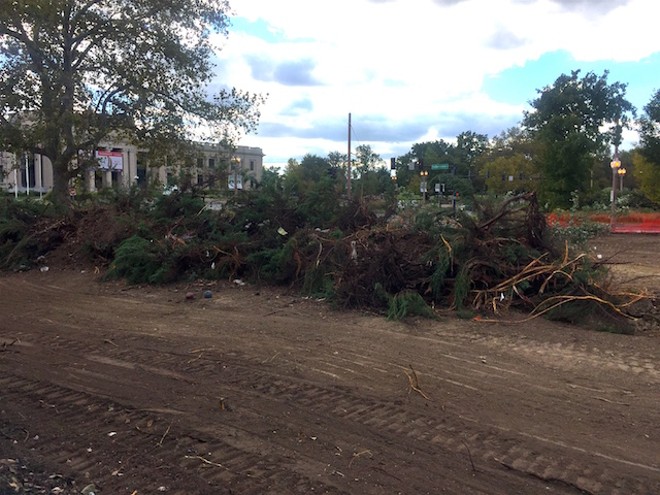