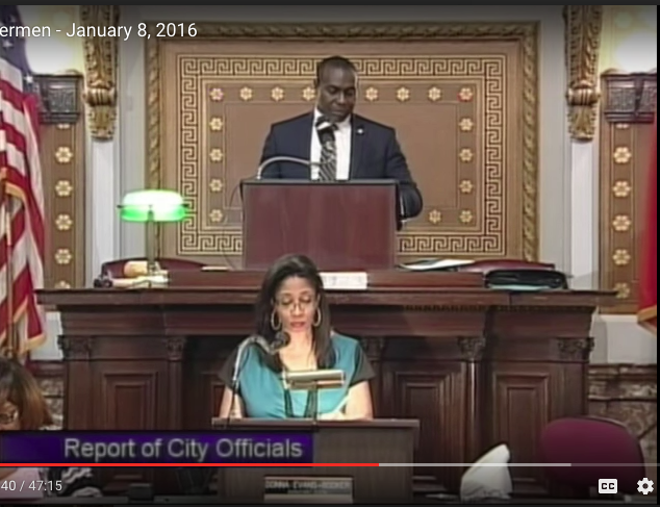 A mother-and-daughter pair of protesters charged with disturbing the peace after protesting at a meeting of the Board of Aldermen last December have been found "not guilty" in court.

The acquittals came courtesy of ArchCity Defenders, the non-profit legal group. They were representing Melissa and Zoe Krause, who were among a half-dozen protesters interrupting the December 2015 meeting to discuss a financing plan for a new football stadium.

The protest was brief, and entirely peaceful. After their carol — a riff on "God Rest Ye Merry Gentlemen" calling for better elected representatives — they were asked to leave the meeting by Board President Lewis Reed. They complied. But instead of letting them go, a police officer followed them into the hallway and begin issuing citations.

And that wasn't the end of it. Thomas Harvey, co-founder of ArchCity Defenders, said the city declined to offer any sort of plea option.

That's even though the city clearly didn't have much of a case — Municipal Judge Joseph Murphy dismissed the charges before the women's lawyers even called a single witness, saying the city had not proven its case.

Andrew Cook, the attorney from ArchCity Defenders who represented the women, said the case is troubling.

"While I'm proud of this outcome for Zoe and Melissa, we know that there are more people in the group of carolers who expressed their First Amendment rights and needed access to lawyers," he said in a written statement provided to RFT. "When you look at the fact that this group sang 30 seconds of a Christmas carol, were charged even after they left when told, and were made to go to trial, you see how important legal representation, time and resources become to win acquittals like we did yesterday."

Kennard Williams, an activist who works with MORE, was among a different group of protesters who sang "America the Beautiful" to protest a meeting in January. They, too, left without resisting — and they, too, were cited, he says. (See video below; the singing begins around minute 25.)

Interestingly, Williams says that Aldermanic President Lewis Reed was on the list of possible witnesses in his case. But Reed himself had tweeted that he didn't think the protesters should face charges. He was never called as a witness.

ArchCity hopes the not-guilty verdicts will shed light on the injustices that people face trying to exercise their right to free speech — and the way that, absent lawyers willing to take their cases, they can end up with serious consequences.

"Andrew Cook and our team at ArchCity Defenders did a great job on this case," Harvey said in a statement. "We as defense lawyers were not even required to put on a defense, which is very rare, but it's due to the sheer lack of evidence to support the charge. They made all these people go to trial and they didn't have anything.

"If there aren't movement lawyers who are willing to take these cases, you're going to get people who plead guilty to things even though the state doesn't have the evidence to convict."