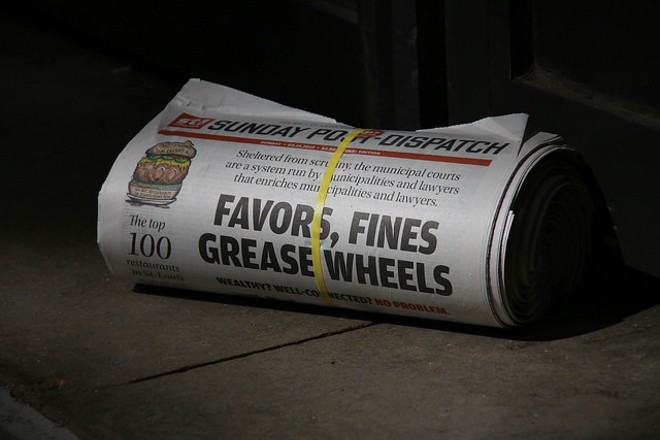 When it comes to Amendment 3, the controversial "Raise Your Hands for Kids" tobacco tax on Missouri ballots this fall, the Post-Dispatch can do one better than John Kerry:

The daily's editorial board endorsed the amendment Sunday, calling the tax "voters' best option" to stop people from smoking — and passing on the attendant medical costs to the rest of us.

Tod Robberson, the paper's editorial page director, disagrees with our contention that the P-D has now changed course three times. He says the initial February editorial was not a formal endorsement. (Which seems true enough reading it; however, it's worth noting that the subsequent editorial in April begins, "It pains us to reverse this newspaper’s support for what seemed like a worthy Missouri constitutional amendment" ... emphasis added. "We should have been more precise in our language in April," Robberson acknowledges.)

Still, Robberson acknowledges that reversing an endorsement even once is unusual, and potentially a bit embarrassing.

"We debated ourselves," he says. Once the board members realized they were in favor of the tax, he says, "We had two questions. 'Is this consistent with our other positions?' We had to admit it wasn't. Then we asked 'Is this going to be embarrassing?' Well, yes it is. But when we reverse ourselves, we have to declare it openly. We're not going to try to hide it. Sometimes it hurts; it's never comfortable. But we've got to be up front with our readers."

Robberson says the back-and-forth speaks to how ridiculously complicated Amendment 3's nuances have proven to be.

As it turns out, Raise Your Hand for Kids/Amendment 3 is one of two potential tax hikes on the tobacco on the ballot this fall. It would raise the tax about 60 cents over four years.

The measure has drawn the support of Big Tobacco, but the association representing gas stations and convenience stores is staunchly opposed. So are representatives for off-brand tobacco products. They're instead supporting a rival measure, Proposition A.

Prop A would only raise taxes on a pack of cigarettes about 23 cents. But that's not the only difference.

The off-brand cigarette companies, which offer cheaper products than the Marlboros you may be used to buying, enjoy about one-fourth of the market in Missouri. And Raise Your Hands for Kids/Amendment 3 would increase their cost even higher than their big-brand competitors. That's because it also slaps those smaller tobacco companies with a 67-cent "equity fee" on top of the across-the-board 60 cent increase.

That fee just happens to make those cheaper cigarettes just about as expensive as a package of Pall Malls — and that's almost certainly one reason R.J. Reynolds is spending millions to support the Amendment 3. It could mean a huge increase in Big Tobacco's market share.

But the debate hasn't just been Big Tobacco vs. Little Tobacco. Opponents to Amendment 3 first suggested that the revenue it generates could end up being used to fund abortions. More recently, they've also suggested that particulars of its verbiage could threaten funding in Missouri for stem-cell research, an argument the P-D agreed with in April, saying one clause within the amendment had "unacceptable long-term implications for important scientific research."

Robberson says the editorial board felt better after seeing a judge opine that the wording on Amendment 3 would not impact stem cell research.

However, Robberson says it wasn't a lobbying campaign that changed its mind so much as a willingness to hear out everyone. After the editorial announced its opposition in April, Raise Your Hand for Kids' spokeswoman had argued vociferously to him that they got it wrong, he says. He'd offered her op-ed space. From there, board members began to second-guess their decision.

And that kind of open-mindedness is something Robberson says he's not just open to, but in favor of. "I love to approach controversy with an open mind," he says, "and have the best argument win the day."

But now that he's sure that's been achieved — yet again! — Robberson can promise one thing.

"We are not switching our position again," he says.

Editor's note: One sentence in a previous version of this story contained inaccurate information about the pricing of "Little Tobacco" products. Their prices are not regulated by the state; they merely comply with state regulations. We regret the error.