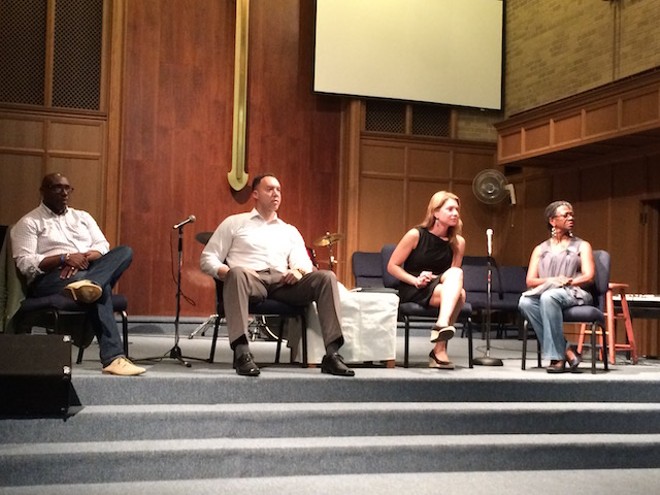 After a federal court ruled that school board elections in the Ferguson-Florissant school district were racially biased, the people who brought the lawsuit against the district face a new challenge: deciding just how the system should change. At a town hall event last night at Ferguson’s Wellspring Church, they sought community feedback on what the next step should be.

The ACLU led the case against the district on behalf of the Missouri NAACP and some black residents. State law in Missouri requires school board elections to be “at large,” meaning candidates from anywhere in the district can run for any open seat, and voters all chose from among the same candidates.

But federal law trumps state law, and last month, the federal court ruled that Ferguson-Florissant’s electoral process had diluted the African American vote, a violation of the Voting Rights Act.

Now the ACLU will offer a proposed solution, and the school board will then have a chance to respond with criticism or a proposal of its own. Three different options were on the table at last night’s meeting.

“None of the solutions that we have here to the structural voting problem are going to be perfect,” says Julie Eberstein, a staff attorney at the ACLU and one of the lawyers on the case.

But she hopes that one of the three proposals will alleviate most of the school district’s problems.

In a cumulative voting system, only one factor in the current elections would change. Instead of being able to vote only once for one candidate, voters would get either two or three votes, depending on how many seats are up for election, to distribute to whoever they choose. If they choose, they could cast all their votes for just one candidate. Eberstein says this would be a way for voters to build their own flexible coalitions, allowing strong backing of candidates who appeal to them based on race, geography or any other factor.

In a seven single-member district model, the school district would be divided into seven voting blocks of roughly equal population, giving black and white voters each a clear majority in a few districts. Majority black districts would then have a clear path to electing their own candidates. But the model could be vulnerable to redistricting in the future, and non-white voters in majority white districts might still feel left out.

The third option is a hybrid model — there would be five geographic districts, along with two additional “superdistricts” that could be either at large, or by a division of the north and south sides of the district. Eberstein says this could combine the best qualities of the other two approaches.

Paul Schroeder, a Florissant resident who served on the school board for nine years, says the cumulative voting system would be the best solution.

“My opinion is that the cumulative voting is the least disruptive that would address the issue,” Schroder says.

Ferguson resident Kenneth W. McClendoel says his ideal solution would be to divide the district into four separate ones — Ferguson, Florissant, Berkeley, and Kinloch.

Tony Roberts, legal director of the ACLU of Missouri, said the court found that school board voting was systematically biased against black voters. Factors like holding elections in April and a persistent legacy of housing discrimination make black voters less likely to be informed about when elections are and how to vote.

This leads to black voters being less able to elect their preferred candidates — and according to the court’s findings, triggers a score of inequalities in Ferguson-Florissant schools, including differences in students discipline, unequal distribution of resources, and police presence in majority-black schools.

“Wherever you find black students, you find these disparities,” Roberts says. “That happens not because anyone set out to discriminate; it happens because the community is not being heard and not being listened to. And that’s why this case is important.”

Eberstein says this could set a precedent that changes how school board elections work in Missouri and around the country.

Rev. Willis Johnson, whose Wellspring Church hosted the event, was also one of the plaintiffs in the case.

“The question I had to answer myself was wherever we want to send our children to this district,” Johnson says. “I hope to be able to say yes.”