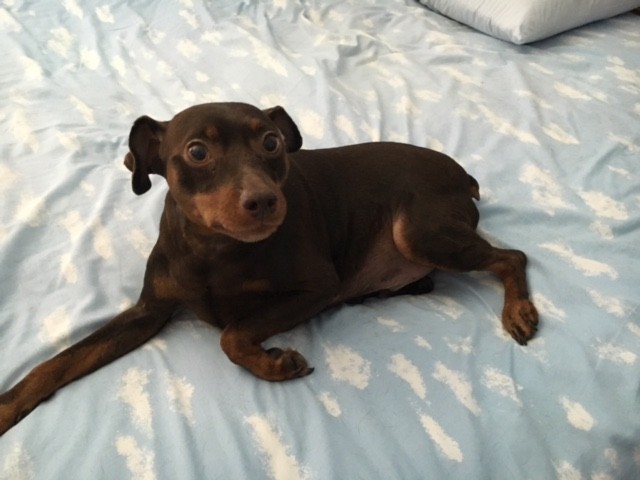 Editor's note: This story was updated after publication to include comments from Nancy Lampert. She denies that Ziggy was harmed during his stay. She also notes that her business has no connection to Sit Means Sit other than it used to be based on site and that she was previously married to its franchise owner.

Carol Clark chose the boarding facility at 2903 North St. Peters Parkway because she wanted the best for her miniature pinscher rescue, Ziggy. She was leaving town for ten days, and feared it was just too long for him to be kenneled. A business in her neighborhood, Baxter's K-9 Complex, promised that dogs could enjoy free play instead.

When Clark took Ziggy over one afternoon in late August to check things out, she asked a key question: Was Baxter's K-9 Complex affiliated with the dog facility that had previously been on site, Sit Means Sit? The owner there had been charged in criminal court for allegedly abusing a dog; she wanted no part of that.

She says the staffer she spoke with gave her an unequivocal answer. "He said, 'Absolutely not,'" Clark recalls. "I told him I was worried about what I'd seen on the news. And he said, 'Oh no, we kicked them out of this spot.'"

As Clark would later learn, that wasn't the case. Records show that Baxter's K-9 Complex didn't just take over Sit Means Sit's building. While the two businesses are owned by different limited liability companies and use slightly different street numbers (2903 North St. Peters Parkway versus 2901), state business filings show that both companies are registered to the same St. Louis County address — the home of Nancy and Anthony Lampert.

Nancy Lampert, who is listed on the website for Baxter's K-9 Complex as the company's CFO, is married to Anthony Lampert. And Anthony Lampert is the same man who was charged with animal abuse in St. Charles County last summer. [Editor's note: The couple is now in divorce proceedings; see update at story's end.]

St. Charles County prosecutors claimed in court filings that Lampert and a younger man, Nicholas Labath, misused shock collars on two labrador retrievers at Sit Means Sit, causing pain and suffering. Another dog was grabbed by the collar, swung around and slapped in the face, according to the Post-Dispatch, to the point the dogs were screaming in pain. The prosecutors had video, the paper reported.

Prosecutors later dropped the charges against Lampert, saying they couldn't prove the charges beyond a reasonable doubt, according to the Post-Dispatch.

Charges against Labath were disposed of in what is essentially an agreement to defer prosecution, so long as he meets certain requirements, according to the prosecutor's office. The details of that agreement are not public record.

Had she known that background, Clark says she would have never left Ziggy at Baxter's K-9 Complex.

She says she quickly came to regret her mistake.

When she picked up Ziggy on September 4, Clark says, she was shocked to find him soaking in urine. A skin condition — later diagnosed as "papular/pustular dermatitis" — covered his chest and abdomen, with all four feet suffering dermatitis as well. He'd also lost five pounds. 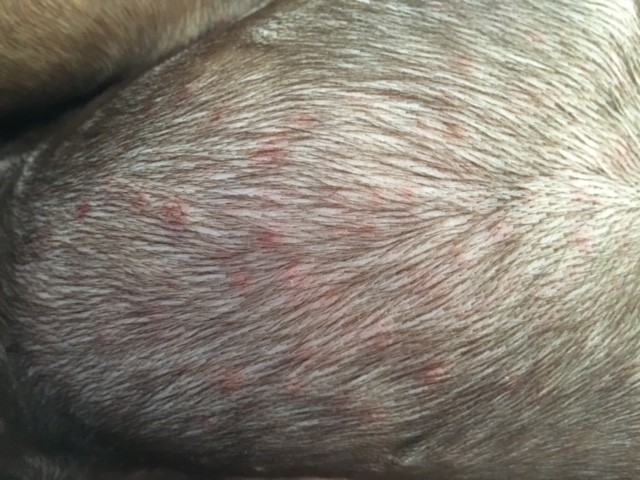 He'd always been overweight — a little dog who ate with gusto. The weight loss was unprecedented. "In all my years I've had him, he'd never lost an ounce," she says. "I'd never seen his ribs before."

At first Clark was too stunned to say much — she carried the dog home and bathed him in shock. But after the vet confirmed the weight loss and skin condition, and treated him with antibiotics and steroids, she called Baxter's K9 Complex. What had happened?

It took days to get her messages returned, and then, she says, it was a text to say the owner was dealing with a family situation. The Lamperts still haven't offered one word of apology, she says — although Nancy Lampert apparently did call the police after Clark used profanity, saying that she'd threatened them.

Nancy Lampert did not respond to phone messages yesterday and today or to an email through Baxter's website. [Editor's note: We heard from Nancy Lampert after we published this story. Please see update at story's end.]

Clark was told that the Lamperts had reported to authorities that Ziggy had run out of food, and that he'd bitten staffers. But Clark left the min pin with a huge bag of food, she says. She also insists she's never known him to bite anyone, although she acknowledges he's had a difficult history.

"He is neurotic," Clark says. "He was an abused dog. I told them that. But I had a cell phone with me. They never called. And they had my mom's phone number — they knew to contact her if anything happened. Had they called, my mom would have brought food over."

After Clark discovered Ziggy's condition, she called St. Charles County's animal welfare department to complain. They referred the case to St. Peters, which has its own animal welfare inspectors.

Lisa Bedian, the city's director of communications, confirms that the St. Peters Health Department got a complaint on September 6, and visited the facility that very day.

The city inspector discovered some irregularities during the visit, and while the facility was allowed to stay open, the inspector ordered that the kennels in question not be used until they could be fixed. A reinspection on September 19 showed that the problems had been fixed, Bedian says.

"We'll continue to determine if anything needs to be done," she says. "And if we receive any other complaints, we'll definitely keep an eye on this place."

We heard from Nancy Lampert a few hours after we published our story. She says she did not get the messages or email we left for her on September 21. At 5 p.m. on September 22, she provided a lengthy point-by-point response to allegations made by Clark as well as additional information.

Lampert confirms that Sit Means Sit had been based on site, but says that her employees would not have stated that they "kicked" the business out. "I asked, and most do even know [Sit Means Sit] was at 2901 other than mail sometimes gets delivered to us. No one kicked anybody anywhere," she writes. "We do not hide from past knowledge or association in that many of our boarding and day care clients were also Sit Means Sit training clients. This has always been transparent. Sit Means Sit franchise is award-winning."

Most importantly, she notes that she and Anthony Lampert are in divorce proceedings; online court records confirm that, showing that he filed in May 2015. They have not shared a home since 2014, she says, and the two businesses are not linked. Sit Means Sit closed when Anthony moved to Florida earlier this year, she writes.

Nancy Lampert also says that Ziggy was never mistreated and that she can't understand why Carol Clark is upset. She notes that Clark initially expressed no concerns at pickup. If she was so upset, "Then why pay for services, or why didn’t they stop payment?" she asks. "I had a hard time trying to figure out what they wanted because they never said. Only cursed and threaten[ed]." She suggests that any weight loss would have been associated with the fact that dogs on site get a lot of exercise — and notes that no other dog has suffered a rash.

She adds, "I do my due diligence in making sure the facility is clean, friendly, safe and loving. We all take great pride in making sure the fur babies come first. If by chance something was to happens, I would make sure the customer is taken care of and changes would be made to ensure it doesn’t happen again."
Update, October 28

We recently heard from lawyers representing Baxter's K9 Complex. They allege that Ziggy bit staff members five times during his stay at Baxter's, and note that even the paperwork from his vet indicating weight loss and a rash does not establish causation between those problems and the facility. They suggest he may have trimmed down because dogs play outside at Baxter's — exercise that can lead to weight loss.

The attorneys also allege that "unhinged and rude behavior" on the part of Ziggy's owners should have been included in the story. "The fact [that Ziggy's owner] engaged in crude language and threatening conduct over a five pound weight loss and a rash on her pet casts a shadow of doubt as to her credibility and rationality," the lawyers write.

The attorneys also take issue with our headline, saying that Baxter's K9 Complex has no troubled history. We did not mean to imply as such. By stating that the "facility has [a] troubled past," we were noting that the physical space that houses Baxter's had been home to a business with a troubled past — Sit Means Sit.

Editor's note: A previous version of this story stated that Baxter's opened eight months ago. The business has actually been open six years. We regret the error.