U. City Police to Pursue Charges Against Teen Arrested in Protest at Salt + Smoke 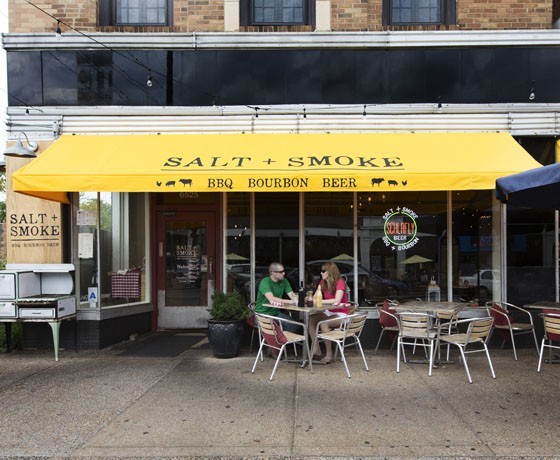 The University City Police Department is sticking by its decision to charge a teenager who a restaurant owner says was wrongly swept up in a chaotic Sunday night protest in the Delmar Loop.

Earlier that day, protesters accompanied by an armed contingent of Revolutionary Black Panthers had marched through the Central West End. Around 8:30 p.m., a break-off group of protesters — which did not include the Black Panthers — took their demonstration to the Loop. After staging a brief disruption inside Mission Taco, the protesters made their way to the Salt + Smoke barbecue restaurant, which is where University City police officers intervened.

While acknowledging that Salt + Smoke owner Tom Schmidt was not present during the protest, police claim that a manager was responsible for summoning officers to quell the disturbance and to make two arrests. In a protester-shot video, a teen identifying himself as "DeAndre Williams" can be seen being taken into custody.

Williams, who is black, is now being charged with municipal violations for peace disturbance and interfering with an officer. Protester Dhoruba Shakur, who was arrested shortly before Williams, faces charges for trespassing and peace disturbance.

But Shakur says that Williams was not part of the protest — that he was guilty of no more than eating while black. He and other protesters have questioned why the teen was taken.

And the restaurant's owner shares those concerns.


As we reported earlier this week, Salt + Smoke owner Tom Schmidt insists that his staff actively tried to prevent Williams' arrest. The teen, he says, was a customer whom police had mistakenly identified as a protester. According to Schmidt, a server and manager had tried appealing to officers that Williams was innocent.

"These are not charges that the police just bring on themselves," Hampton says. He notes that police cannot file charges without the cooperation of a victim or witness to a crime. "We as a police department did not charge him for the peace disturbance. The manager chose to charge him with a peace disturbance."

But when asked if the manager had pointed out Williams and Shakur in particular, Hampton wasn't as definitive. Like Schmidt, Hampton wasn't personally on the scene of the protest and arrests.

"I was not there, I couldn't tell you that specifically, but I believe so," he says. "There's some type of identification process, confirming an allegation against a person. In this particular case, I believe that’s what occurred."

Based on his employees' accounts, Schmidt tells Riverfront Times that the manager in question had spotted University City police officers on patrol outside the restaurant during the protest. The demonstration had turned heated, he says, with people banging on tables and standing on booths. The manager had simply asked for help.

"I don't believe [the manager] was calling for arrests or singling out anyone," Schmidt says. "We have disturbances from time to time on Delmar where we call the police and an arrest is not the result."

Hampton confirms that no one at Salt + Smoke called 911. It remains unclear why officers targeted Williams and Shakur from the others at the restaurant. Both were released later Sunday night.

In an interview earlier this week, Shakur said Williams "was not participating in the protest whatsoever" and that the teen "was already in Salt and Smoke and was eating his food" when the protest began.
Follow Danny Wicentowski on Twitter at @D_Towski. E-mail the author at Danny.Wicentowski@RiverfrontTimes.com