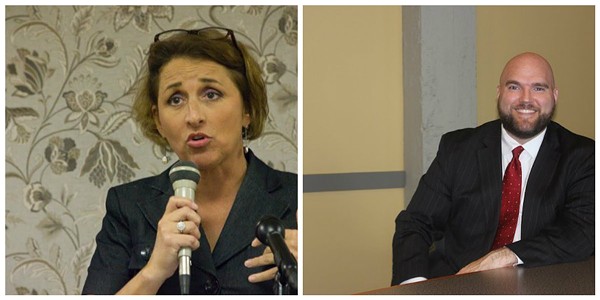 About that special election this Friday, September 16 ...

Agreeing with activist Bruce Franks Jr., the Missouri Appellate Court ruled today that "irregularities of sufficient magnitude" meant that a revote would be necessary to the determine the winner of the Democratic primary for the 78th Missouri House District.

Voters in the district, which stretches from north St. Louis to parts of Cherokee Street, Lafayette Square and Soulard, will cast ballots this Friday to determine whether Franks or incumbent State Rep. Penny Hubbard is the Democratic Party winner (and, in light of the district's near-total Democratic populace, gets to represent the district in Jefferson City).

The decision is another big victory for attorney David Roland, who beat back for a second time attorney Jane Dueker, who is representing Hubbard (D-St. Louis). Dueker had argued that elderly and disabled voters would be disenfranchised if the previous September 2 election results were thrown out.

Ordering a special election to replace the results of the original, improperly conducted election does not prevent qualified voters from casting a vote. Every qualified voter will still retain his or her right to vote in the special election. Implementing procedures to safeguard against fraud helps ensure that qualified registered voters’ votes are not diluted by unlawful voter activity.


The appellate verdict affirms a previous ruling by St. Louis Circuit Court Judge Rex M. Burlison, who ordered the special election two weeks ago. Burlison wrote that the problems with absentee ballots in the race between Hubbard and Franks were too great to allow election results to stand.

In a statement to the media, Roland suggests that the appellate ruling went even further:


This is one of the rare cases in which the party that lost the trial actually made their position worse by appealing. The Court of Appeals emphatically rejected every argument Hubbard's attorney put forward and reaffirmed that, because the absentee ballot process is a special privilege that is also prone to abuse, it is critical that voters and election officials strictly adhere to the statutes governing the use of those ballots.

Votes cast without following those statutory requirements are not to be counted...


Franks lost the September 2 primary election by just 90 votes. He actually won the ballots cast on election day, but Hubbard did well enough in absentee voting to overcome his margin and eke out a (temporary) victory. Judge Burlison's ruling, however, crossed out that win and ordered a do-over.

But Dueker appealed on Hubbard's behalf, and the two sides appeared in an appellate courtroom to make their case just a few weeks after they originally squared off in front of Judge Burlison.

In the previous case, Burlison had sent Franks a ringing victory.

Franks had originally raised questions about Penny Hubbard's success with absentee ballots in the weeks leading up the election. When the city Board of Elections failed to act on those concerns, attorney Roland had filed a public records request seeking information related to absentee balloting. When the Board denied that request, he filed a lawsuit.

Roland won that lawsuit, too — and the combination of victories was enough to draw the attention of Governor Jay Nixon. He appointed two members to the elections board, removing two long-serving members whose terms had lapsed.

Editor's note: This post was updated after publication to include a statement from David Roland.