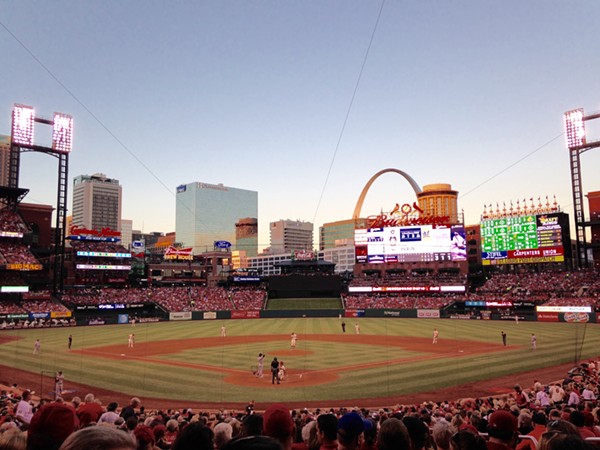 Béisbol is coming to St. Louis.

On September 29 and 30, Cardinals fans will be able to listen to home games broadcast in Spanish for the first time as part of the team's Fiesta Cardenales.

The two-night broadcast falls during National Hispanic Heritage Month and comes at time when the Cards are trying to broaden their appeal with Spanish speakers. A new twitter account, @cardenales, launched in April, and the team has also dedicated a video page on its website to Los Cardenales.

St. Louis has a small but growing Hispanic and Latino community, comprising almost four percent of the city's population, according to U.S. Census stats. Garcia, a driving force behind the event, says it was rare to see another Hispanic person when she moved to St. Louis eighteen years ago. But that's changed.

Along with the radio station, she runs a Spanish-language newspaper, a grocery store and the popular La Tejana restaurant (3149 North Lindbergh Boulevard, Bridgeton; 314-291-8500). People don't realize the size of the community, partially because it's more spread out, Garcia says. Outside of Cherokee Street in the city and a few enclaves in west county, Hispanic and Latino residents are scattered across the metro.

Garcia sees the broadcast as a sign of growing recognition. She expects it to be popular with Spanish-speaking listeners.

"They're going to be proud," Garcia says. "We're a very proud community."

Veteran announcer Polo Ascencio, who works with the Los Angeles Dodgers, will be flying in from L.A. to call the games. The September 30 game against the Milwaukee Brewers will be the official Fiesta Cardenales, with special Cardenales T-shirts and a pregame celebration in the Riverview Corner of Busch Stadium.

To get the shirt and join the pregame events, fans will need a special theme ticket, available at cardinals.com/theme.