Thurman's in Shaw Is Now Open, with a New Look for the Former Thurman Grill 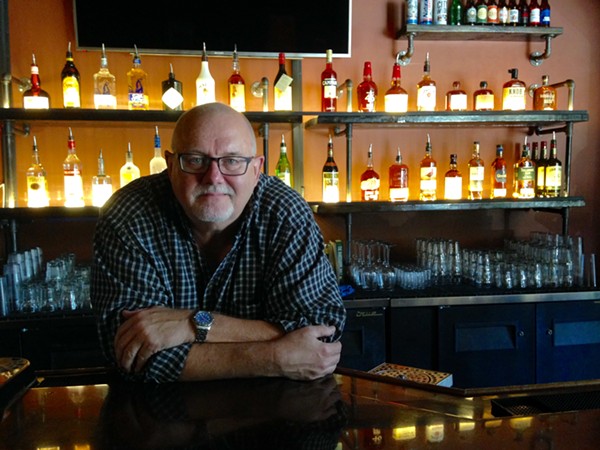 "It's a neighborhood place with a chill vibe that enjoys jazz, blues and funk," he says.

The 61-year-old Benton Park resident took over the old Thurman Grill & Provisions at the end of June, and began an extensive remodel. He pulled out all the old booths, replaced the kitchen and filled the patio with a half-dozen farmhouse-style tables. The interior is now a deep brown with softly-lit back bar, Fowler's collection of concert posters and high-top bar tables.

He modeled it after a traditional Dutch brown cafe, the tobacco-stained neighborhood bars scattered across Amsterdam. The result is sleeker and more open than the old Thurman's, without losing its low-key corner bar appeal.

Located just north of Tower Grove Park, the bar has the potential to draw park-goers and residents of the trendy, but surprisingly booze-starved, Shaw neighborhood. Fowler sells all local beers from nine taps, eleven varieties of wine and what he describes as a "respectable" whisky selection.

It should serve as a slightly more relaxed alternative to Sasha's on Shaw wine bar, the only other place in walking distance to have a drink.

Fowler says he refined his plans for Thurman's through extensive research as a customer of bars here and across the world.

"It's an a cumulation of a lot of time on this side of the bar, and also seeing what people get wrong," he says.

Thurman's will still be a place for live music, with a series of acts already booked. Fowler, who was working as an audio technician for the St. Louis Symphony when he learned the bar was for sale, is especially proud of the sound system.

"I'm pretty sure I have the best bar stereo on the planet," he says.

The kitchen is expected to open in about a week when Thurman's hosts the Shaw Social, a monthly neighborhood mixer. Fowler says they'll start simple with standard bar fare, such as wings and fries, and add vegetarian and children's plates.

He plans to open 4-11 p.m. Tuesday, Wednesday and Thursday. Weekend hours will stretch to 1:30 a.m. Fowler eventually wants to open at 11 a.m. on Saturdays for lunch. We welcome tips and feedback. Email the reporter at [email protected] or follow on Twitter at @DoyleMurphy.