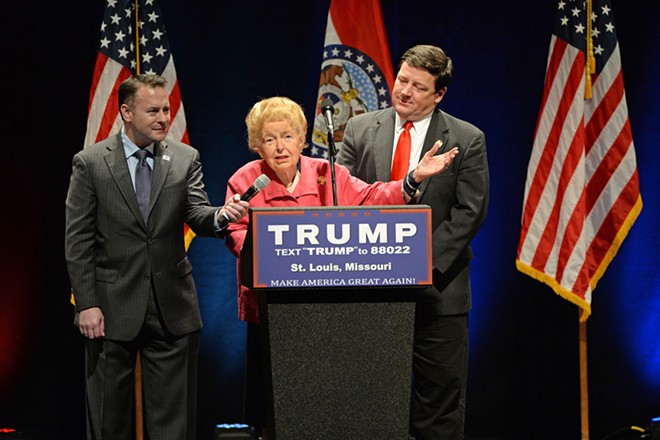 
Yesterday, Phyllis Schlafly died. The St. Louis native rose to prominence in the 1960s and subsequently played a major part in the demise of the Equal Rights Amendment, which simply proclaimed, “Equality of rights under the law shall not be denied or abridged by the United States or by any State on account of sex.” Schlafly didn't like immigrants, working women or gay rights. (Even though her son is gay.) She didn’t think that sexual harassment in the workplace was a problem. She was against sex education. She argued that climate change wasn’t real. She denied that marital rape was even possible. She claimed that the atomic bomb was a gift from God.
But beyond the sheer disgustingness of her views, Phyllis Schlafly was a massive hypocrite. She spent her life doing almost exactly the opposite of what she preached. She said that women should be submissive homemakers who should depend on their husbands for money, even as she gave speeches and ran for office and got a master’s degree and a law degree and wrote a ton of books and stuffed her bloated bank account. Schlafly was the model on which dangerous dumbasses like Sarah Palin and over-the-top evil attention hogs like Ann Coulter base their schtick. (Side note: I’ve just finished watching Stranger Things and I was very disappointed when the flesh-feasting monster was revealed to be Ann Coulter. So predictable.) Schlafly spent her whole life doing her best to plaster every crack in the glass ceiling with her bullshit. And if you are a woman or if you have a daughter or a wife or a girlfriend or a female-identifying parent, Schlafly’s interference with the ERA has messed with you personally. She was also a major embarrassment to St. Louis. Born in the area, she graduated from Wash U. and lived here for much of her life, spending many years just across the Mississippi River in Alton. And if you think you have it bad, just imagine having to share her last name. One of her last major imbroglios involved fighting against her nephew, Tom Schlafly, in an attempt to block him from trademarking his brand of beer, saying (in essence) that she made the name famous, so screw his brewery. Her son (and lawyer) added that alcohol is not in line with his mother's "conservative values.” A judge dismissed her opposition just last month. Schlafly’s views should’ve outraged the less extreme members of her political party, but instead they percolated, helping to build a foundation for the culture of intolerance, a culture in which a putrid bag of feces like Donald Trump can be the Republican nominee for President of the United Freakin’ States. Go figure: Schlafly was an enthusiastic proponent of his candidacy — and even introduced him at his rally here earlier this year. But there might be another bonus to Schlafly being dead, aside from just her being dead: Social media is having one hell of a celebration.


Let’s peek in on the party:

On the one hand it's a shame Phyllis Schlafly died, but on the other it's always heartwarming when Satan calls one of his own home.

God never takes a Gene Wilder without relieving us of a Phyllis Schlafly.

In lieu of flowers, Phyllis Schlafly's family requests that you take a moment to set back the cause of women's rights in her honor.

YES! #PhyllisSchlafly, notorious homophobic and anti-women's rights bigot, is finally dead! 🎉🎉🎉
She's always been a disgrace to my hometown.

How rich that #PhyllisSchlafly once said "there will be a woman President over my dead body." Come November, she'll get her wish.

Mother said always say something good about the dead. #PhyllisSchlafly is dead. Good.

But #AnnCoulter is her horcrux.

RIP, Phyllis Schlafly. No woman ever worked so tirelessly, ventured so far on behalf of the belief that other women should do none of that.

You're all complaining about 2016, but it just killed Phyllis Schlafly, so it's alright by me.