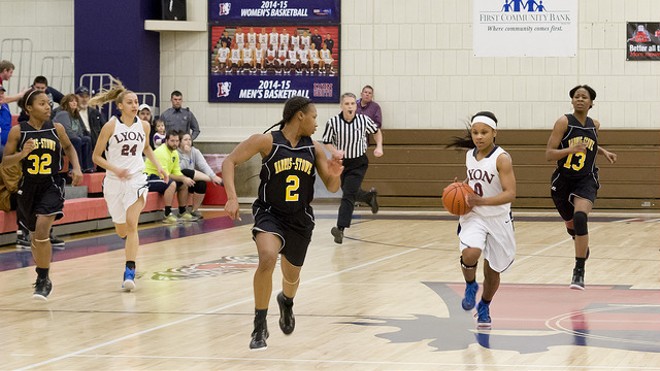 A pot bust at the center of a college basketball player's expulsion from Harris-Stowe State University was bungled by school administrators who lied to the police, according to an incident report obtained by Riverfront Times.

Written by a St. Louis police officer, the report implicates Dean of Student Success Emmanuel Lalande and Director of Athletics Jamaal Mayo for inventing details to explain how they took possession of a gym bag — allegedly smelling strongly of weed — that belonged to student athlete Brittany Jackson.

The incident led to Jackson's expulsion from Harris-Stowe — and, briefly, a warrant for her arrest on felony charges. But she claims the entire incident was manufactured and then hyped by top administrators as payback for rejecting Lalande's aggressive sexual advances. She's now preparing to sue the university.

The incident report traces the mess back to March 29, when St. Louis Metropolitan Police officer Christopher Rauss was dispatched to Harris-Stowe, the historically black university in Midtown, for a "recovered article." A university public safety officer told Rauss that Dean Lalande had recovered a gym bag that might contain marijuana.

Rauss' incident report notes that Lalande had advised the public safety officer that an "anonymous source" had provided the tip that led to the bag's discovery in a locker room. Lalande added that he'd grilled a basketball player named Brittany Jackson during a meeting the previous day, and that she had confirmed the bag belonged to her.

Rauss inspected the gym bag and found what appeared to be, yes, marijuana. A warrant was issued for Jackson's arrest on two potential felony charges, possession of more than 35 grams of marijuana and "distribution of a controlled substance within 2,000 feet of a school."

At some point that same day, Jackson was called into a different dean's office. Jackson was informed that she was being expelled because she violated the school's zero tolerance drug policy.

Getting kicked out of school, though, was the least of her worries. If convicted, those felony charges could have put Jackson in prison for years.

But the case fell apart quickly.

In his report, Officer Rauss wrote that the school's story "contained various inconsistencies." In fact, through subsequent interviews with Jackson, Lalande and others, Rauss concluded that there had been no "anonymous source." Instead, administrators had lied to him.

In Rauss' report, the true story was less a grand conspiracy than a clumsy attempt by school administrators to conceal the role head coach Hanna Haden had played in Jackson's predicament — and meddling by Dean LaLande, who apparently interrogated Jackson in a on-one-one meeting rather than waiting for police to handle the case.

It's that same meeting in which Jackson says she was sexually harassed.

Rauss' investigation revealed a different sequence than what the university initially told police. It all began when, during spring break, Jackson had called up Haden, asking her coach to retrieve a gym bag left in the locker room. Haden was out of town, so on March 7 the coach called Director of Athletics Jamaal Mayo and asked him to grab the bag.

Mayo told Rauss that when he entered the locker room, he was confronted by the odor of weed. The smell came from the locker containing Jackson's bag. Mayo took the bag and went directly to Dean Lalande.

That's when things flew off the rails. Mayo would later admit to police that he lied to Jackson about how the bag had been discovered to protect the basketball coach. The lie was later repeated to the police.

Mayo stated to me that the "Anonymous Source" that was mentioned in the previous portion of this report was fabricated to avoid any confrontation or out lash [sic] toward Haden. Mayo also fabricated a story to Jackson to explain how the bag was located. He told her there was a Clean Tech cleaning crew on scene who was cleaning out the locker and that's how the gym bag was found.

Beyond the lies to the police — which could be used to undermine the university's testimony in a criminal trial — was the matter of the bag itself. The locker where the bag was found didn't have a padlock, and the locker room had been used by a visiting basketball team over the break. That left open the possibility that someone else had accessed the bag and planted the drugs.
After the bag was retrieved, Lalande told police he held onto it for a few weeks — he said he kept it "awaiting Jackson's return," apparently so he could question her in person.

It was enough for police to rescind the warrant against Jackson. And in a letter dated June 1, Jackson was informed that her expulsion had been reduced to a year's suspension.

But Jackson did not return to Harris-Stowe. And that might have something to do with what happened in that in-person meeting between herself and Dean Lalande on March 28, one day before police were called to the university.

In a lawsuit filed in June, Jackson accused the dean of groping her. Lalande, she claimed, told her that her drug stash had been discovered in the locker room, but that he could offer "help."

"Mr. Lalande told me he wanted to 'help me' and then made sexual advances towards me, including but not limited to, touching my buttocks inappropriately," wrote Jackson in a formal complaint filed in June with the Missouri Commission on Human Rights.

For now, Jackson has withdrawn her lawsuit against Lalande and two other school officials in order to allow the Missouri Commission on Human Rights to review her charge of discrimination against Harris-Stowe. Jackson's attorney, Thomas SanFilippo, says this is a common step in litigation and that he expects to refile the lawsuit in the near future.

"Harris-Stowe administrators swiftly and aggressively suspended my client from school and evicted her from her campus housing, all within about 24 hours, threatening this student athlete with being arrested for trespassing if she attempted to return to her classes, her team, or her home on campus," said SanFilippo in a written statement. "Given this report, I believe that Harris Stowe owes their students and faculty, their generous donors, and the members of the public they purport to serve an explanation."

Update, 10:30 am: In a statement provided to RFT this morning, Lalande denied Jackson's accusation of sexual harassment and suggested the former basketball player was a known drug dealer who is now making false claims because she is upset about her expulsion.

"I vehemently refute any alleged sexual advances to this student," Lalande wrote in an email. He maintains that nothing inappropriate happened during the March 28 meeting. "While in my office, I never came remotely close to this student. Our conversation when she admitted to having the drugs was 20 minutes or less. Again, this is a drug case by a student known for selling drugs."