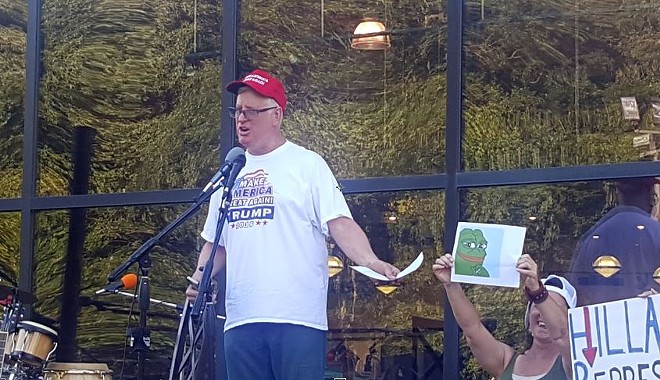 Over the weekend, St. Louis' Tea Party joined forces with the miasma of American anxiety that is the Trump movement. At a rally Sunday at a Festus Harley-Davidson dealership, some 200 patriots who really, really hate Hillary Clinton listened to a succession of speeches delivered by a string of local conservative luminaries who also really, really hate Hillary Clinton.

But it wasn't all Benghazi and email scandals. Ed Martin, the former head of the Missouri Republican Party and a key figure in the chaos overtaking conservative icon Phyllis Schlafly's Eagle Forum, took the time to explain to the crowd that there is nothing racist about disliking Mexicans.

"Donald Trump is for Americans first," said Martin. "He’s for us first. It is not selfish to support, or to be for, your neighbor, as opposed to someone from another nation. And Mexico, Mexicans, that's not a race. You’re not racist if you don’t like Mexicans. They're from a nation."

Clearly on a roll, Martin then brought the same clearheaded logic to the subject of a Muslim immigration ban.

"If you don’t think Muslims are vetted enough because they blow things up, that's not racist," he said. "There's white Muslims, black Muslims, green Muslims. This is not racism."

(In a statement later sent to the St. Louis Post-Dispatch, Martin attempted to walk back his boldly racist remarks by explaining that his reference to "Mexicans" — you know, the people who are definitely not a race but "from a nation" — was directed at illegal immigrants. Thanks for clearing up that confusion, Ed.)

On a more mellow portion of the conservative Trump-supporter spectrum, talk show host Jamie Allman regaled the crowd with his vision of The Donald as a magnetic force for diversity and inclusion.

"The guy is a coalescer. He’s a unifier in ways that we haven’t seen since Ronald Reagan," said Allman, who also spoke with pride about contributing to the Trump campaign.

But if there was a headliner to the event, it was Jim Hoft, the local blogger behind The Gateway Pundit and darling of orbital blowout truthers across the land. In June, Hoft came out as a gay in a column on Breitbart.com, arguing that Donald Trump is the only president who can protect gays from Muslim terrorists.

Hoft led the crowd in the increasingly de rigueur chants of "lock her up" and talked about Clinton's latest scandals. Reading from prepared remarks, Hoft mocked Clinton's criticism of the "alt-right," the nebulous moniker applied to pro-Trump internet trolls who are suddenly relevant even though nothing they do makes any goddam sense.

Here's a video of Hoft talking about notorious alt-right meme Pepe The Frog. The meme is an illustration of a smarmy, side-eyeing frog that metastasized in the depths of the internet to become a sprawling inside joke for some of the web's most annoying racists.