In a biker bar north of downtown St. Louis, a back staircase delivers Linda Kilhoffer to Eric Catalano's second-floor tattoo studio. The shop area is awash with the morning's sunlight. In the corner station where Catalano does his work, a nipple sits on a steel tray covered by a purple surgical napkin.

The nipple is a prosthetic, with a screw sticking out of its flattened base. It will be fitted into Kilhoffer's breast by way of a microdermal implant — a tiny metal post sunk into the flesh.

This particular prosthetic is only the first stage of a two-part procedure. It's a stand-in for the bespoke piece that Catalano's engineering partner is working on, a reproduction of the nipple Kilhoffer lost in 2012 to a double mastectomy.

For Catalano, though, the nipple is the result of years of effort. After organizing a free tattoo giveaway in 2010 to mark Breast Cancer Awareness Month, Catalano found himself inspired to start offering his skills to women who'd been left scarred by their battles with cancer.

He started with tattooing areolas and nipples. Soon after, he began toying with the microdermal technique he used for body piercings, the same method that keeps a small diamond stud anchored to his own cheek: First, a small metal post is inserted just beneath the top layer of skin. The post contains a socket, and when the incision heals around the metal, objects can screwed or fitted into the opening.

After months of tweaking, he invented a process to implant a prosthetic nipple as quickly as a piece of jewelry.

"The options for women after the surgery, it's almost insane," says Catalano, who runs tattoo shops in St. Louis and Hecker, Illinois. As he met more breast cancer survivors, he listened to their complaints about shoddy adhesive nipples and painful skin grafts. An especially gruesome option involved twisting the breast's remaining flesh to create a protruding "nipple."

Kilhoffer had tried that one with a plastic surgeon. Deprived of blood flow, the "nipple" turned black and fell off two weeks later.

"There's not enough superficial circulation left for any of these things to work," Kilhoffer says. "They had to scrape so much to get the cancer out that it’s just scar tissue now."

Catalano performed his first successful microdermal nipple implant last year, and since then he's provided about fifteen breast cancer survivors with new nipples. Some women are referred to him by hospital staff, others by general word of mouth. In Kilhoffer's case, it was an aesthetician who tipped her off to Catalano's services.

The procedure itself takes about fifteen minutes. Kilhoffer lies down on the reclining leather couch and removes her shirt. Catalano goes to work. When he's done, Kilhoffer's right breast bears a diamond stud, a placeholder that helps the implant to heal. When that healing is complete — which takes about two months — she'll return for her nipple. 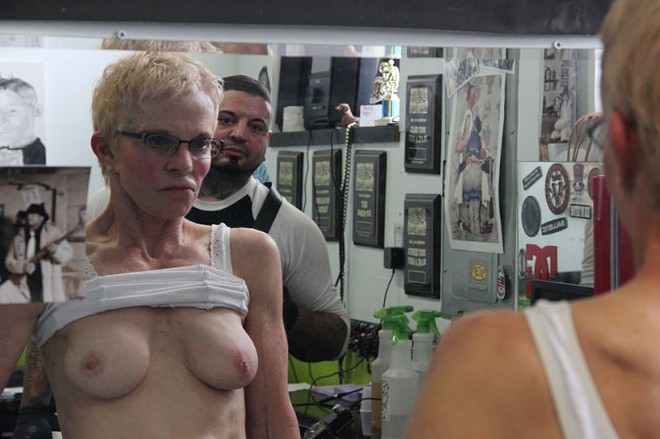 Catalano doesn't advertise the prosthesis, and he's hesitant to charge money for the procedure. He says he wants to expand his services to more women, but the business plan has yet to come together. He doesn't want his invention to become a cash cow — he just wants to help breast cancer survivors. His heart won't let him attach a hefty price on the procedure. "I just can't bring myself to do it," he says.

This week, Catalano launched a new crowdfunding campaign in the hope that the public can fund future procedures at no cost to cancer survivors. For now, the service remains a side job for Catalano, who supports himself and a son through his tattoo and piercing businesses.

"In modern-day society, although they have compassion, people don't really understand the depths of the struggle, the fight, the pain, the life-changing consequences of breast cancer," he says. "I feel blessed to have been doing this."
Follow Danny Wicentowski on Twitter at @D_Towski. E-mail the author at Danny.Wicentowski@RiverfrontTimes.com