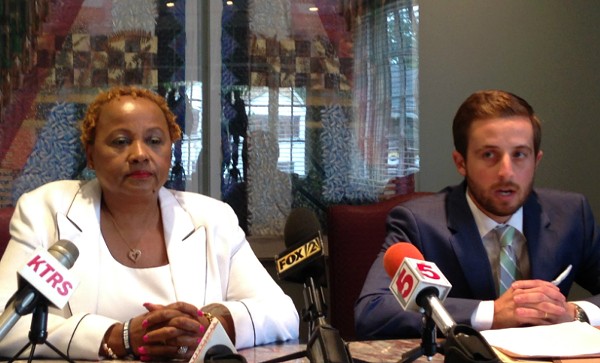 Another high-ranking St. Louis police officer is suing the city and Chief Sam Dotson for discrimination.

Major Rochelle Jones, a 33-year veteran of the department and its top female officer, claims she was passed over for a promotion because she is a woman.

Jones and majors Michael Caruso and Ronnie Robinson were all candidates for a newly created lieutenant colonel position in September 2015. When Dotson selected Robinson without even interviewing the other candidates, Jones and Caruso suspected the hiring process was rigged against them. Both had more than 30 years on the job, compared to 25 for Robinson. They also had earned master's degrees, while Robinson doesn't have even a bachelor's degree, according to the lawsuits.

Caruso, who is white, sued Dotson and the city on Wednesday in federal court, alleging the chief illegally chose Robinson because he's black.

Caruso scored first on a competency exam for the job, followed by Jones and then Robinson, the suit says.

Caruso and Jones are both represented by Pleban & Petruska Law, which also represented another officer who successfully sued the city for discriminatory promotion practices. A federal judge in that case found Sgt. David Bonenberger was passed over for a top job at the police academy so the department could hire a minority candidate.

Bonenberger was eventually awarded $620,000, and a federal judge ordered the city to refrain from biased hiring practices.

A pioneering officer, Jones has had a decorated career with the department. She was the first woman in the city's history to command the homicide division and is now deputy commander of the Bureau of Operations, which oversees the department's administrative functions.

She had hoped to become just the second woman and first black woman to rise to the rank of lieutenant colonel, the equivalent of deputy chief. She claims Dotson told her he had to hire either her or Robinson, a statement that was cited in Caruso's suit as proof that Dotson wanted to hire a black officer. The department's two other lieutenant colonel positions are held by white men.

The police department had this to say about the case:

"Last week, this same law firm announced a lawsuit alleging race discrimination on behalf of a white male officer. The lawsuit announced today alleges gender discrimination on behalf of an African American female officer. The promotion process to lieutenant colonel followed the civil service processes outlined by the Personnel Division of the City of St. Louis to ensure fairness."
Jones' attorney, J.C. Pleban, says they process was unfair, whether Caruso was bypassed because of race or Jones because of gender.

"The point is a fair shake for these officers," Pleban says. "That's not what happened here."

Jones says she was informed by letter to schedule an interview for the job but claims she never got the opportunity — Dotson announced he was promoting Robinson just one day after the letter arrived.

She says she met with Dotson after she heard the news, but when she asked what more she could have done, the chief had no answers. She says she knew right then she needed to sue, if only to set an example for any cops who hope to be rewarded for the good and difficult work they do.

The suit, which seeks Jones' promotion to lieutenant colonel along with an unspecified amount of money, could take eighteen months to two years before ever reaching a jury, Pleban estimates. In the mean time, Jones says she'll keep doing the job.