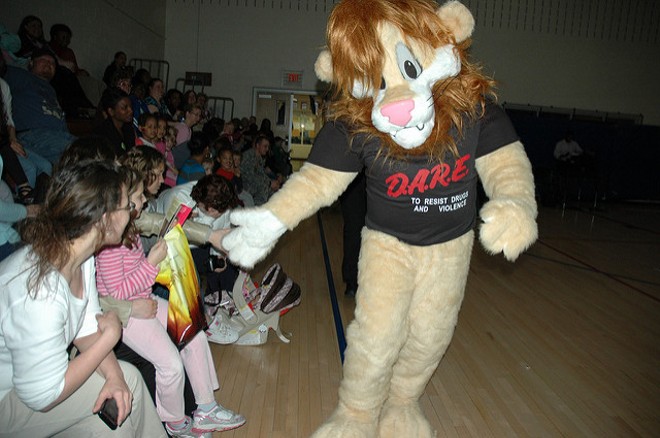 Medical marijuana is legal in 25 states (along with Washington, D.C., and Puerto Rico) but a dozen Missouri prosecutors are hoping to stop Missouri from becoming the 26th. To that end, the prosecutors are attempting to block a statewide ballot initiative from reaching voters in November.

According to an August 18 affidavit filed in Cole County, marijuana is a gateway drug that "destroys children's lives and results in addiction and a lifetime of suffering." Not only that, but legalizing the plant for medicinal purposes "would be a devastating mistake for millions of Missourians."

A lifetime of suffering — from marijuana? You read that right. The affidavit bears all the hallmarks of a vintage DARE presentation or a Mr. Mackey special.

The affidavit (embedded below) bears the names of St. Louis City Circuit Attorney Jennifer Joyce and St. Louis County Prosecutor Bob McCulloch. Joyce did not respond to requests for comment on Friday, but McCulloch told KMOX last week that legalizing marijuana through a constitutional amendment would violate the federal prohibitions placed on pot.

“By enacting something that is contrary to federal law … it violates both the Missouri and the U.S. Constitution and that’s what we are asking the court to determine,” McCulloch said.

The prosecutors are basically trying to insert themselves into the middle of a lawsuit filed by New Approach Missouri, the group that hopes to legalize medical marijuana in the state. Earlier this month, Secretary of State Jason Kander announced that the initiative hadn't gathered enough valid signatures to be certified for the ballot. New Approach Missouri is suing Kander to reinstate thousands of signatures.

The group's only hope of letting voters weigh in on the matter this November is convincing a judge that enough signatures are valid. But if the prosecutors' request to intervene is granted, then not only would New Approach Missouri have to fight Kander's determination, but it would be fighting off the busybody prosecutors, too.

That's even though the prosecutors' arguments are patently ridiculous.

If McCulloch would just take a fat hit off this blunt we call reading the news, he would grok that the federal government has essentially abandoned its state-level prohibitions for medicinal cannabis. In 2009, then-U.S. Attorney General Eric Holder announced, "It will not be a priority to use federal resources to prosecute patients with serious illnesses or their caregivers who are complying with state laws on medical marijuana." In 2014, Congress passed a law that prohibited federal agents from interfering with how states manage their medical marijuana programs. In fact, that very law was upheld in federal court earlier this month.

Put another way, the fact that the federal government treats marijuana like heroin is irrelevant to Missouri's push for medical cannabis. On top of that, the Missouri legislature has already recognized the medicinal benefits of hemp oil for children with rare forms of epilepsy.

And beyond that, the biggest drug problem in Missouri these days isn't pot, as these prosecutors know full-well. It's instead a type of drugs that were marketed with the federal government's blessing — opioids.

John Payne, New Approach Missouri's political director, tells RFT that the prosecutors' attempts to meddle in the ballot measure are way out of line.

"Prosecutors are elected to enforce the laws, not to lobby for their own self-interests or oppose the voters' right to reform their government through the initiative process," says Payne. "We believe doctors and patients, not politicians, should be making decisions about medical cannabis."

MO Prosecutors Motion to Intervene by Danny Wicentowski on Scribd