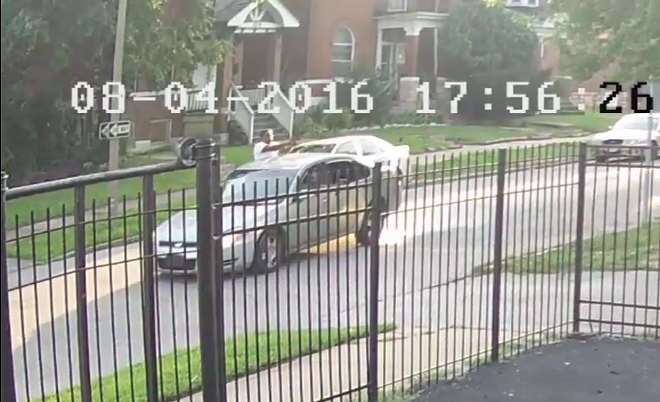 St. Louis cops are hoping video of a deadly drive-by shooting will lead to a killer's arrest.

The gunman in the August 4 murder of 20-year-old Dominick Reece in the Wells-Goodfellow neighborhood was caught on newly released surveillance video, authorities say.

The chilling footage shows the shooter perched on the rear window of a gray Chevy Impala, his body half out of the car as he fires multiple rounds over the sedan's roof.


Reece was part of a group of young men hanging out shortly before 7 p.m. in front of 5347 Terry Avenue, police say. The Impala pulled up in front of them, and at least one person in the car opened fire. Reece was killed, and an eighteen-year-old was badly wounded in the ambush.

A second eighteen-year-old sprinted east on Terry and darted north into an alley with the Impala close behind, authorities say. The sedan stopped at the mouth of the alley, and one passenger and the driver both fired at the fleeing teen, police say. That kid managed to dodge the bullets and escaped uninjured.

More than two weeks later, police are still searching for the shooters. They're hoping someone recognizes the Impala, distinguished by its five-spoke wheels, missing front license plate and a small amount of damage near the driver's side headlight.