Someone else is going to have to roll out the barrel this year.

Fighting multiple lawsuits and years of financial trouble, the founder of the Soulard Oktoberfest has canceled this year's event, the Riverfront Times has learned.

John McKinstry ran St. Louis' main German-themed keg party for a dozen years, racking up massive bills, battling creditors and making enemies even as he drew tens of thousands of revelers to Soulard every second weekend in October. But that's now come to an end. In response to numerous messages left for McKinstry, his attorney wife, Natalia McKinstry, directed us to a freshly posted statement on the event's website.

The board of directors of the Soulard Oktoberfest Benevolent Association's "took the decision to postpone the festival for one year in light of the need to bring the costs of running the event in line with revenues," the statement reads.

Word of the festival's demise had begun to filter across Soulard through neighborhood groups and vendors in the last two weeks. Faced with the prospect of no German beer-drinking festival this year, the Soulard Business Association has been hastily preparing to launch a replacement event. It's to be called Soulard's Octoberfest, association secretary Chris Cushing tells the RFT.  "We're going to take baby steps, see how it goes this year," Cushing says.

For McKinstry's organization, lawsuits and tax filings show costs and revenues haven't been "in line" for some time. At least one former board member says it's a wonder Oktoberfest has lasted this long.

Capital One Bank has filed two suits against McKinstry, alleging he owes $30,294 on one credit card tied to the festival and $8,474 on another. A rental company settled a lawsuit in March after alleging McKinstry stiffed them on a $25,078 bill for equipment and credit provided for the 2015 festival. The St. Louis Metropolitan Sewer District sued McKinstry and his wife in May for an $1,827 bill. 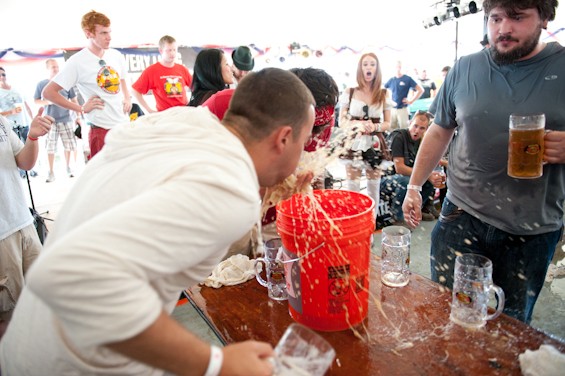 McKinstry, through a court challenge filed by his wife, was finally able to regain control of soulardoktoberfest.com late last week. The site now redirects visitors to soulardoktoberfest.org, a bare-bones webpage that featured only the festival logo and a string of useless tabs until yesterday afternoon.

The festival began in 2004 in Soulard Park and moved twice to accommodate the growing crowds, eventually landing in a lot across the street from the Soulard Market.

A non-profit organization, the festival had a volunteer board, but it was McKinstry's show.

Attorney Brady McAninch of Hipskind & McAninch served on the board in 2014 and left in disgust. "You quickly realized, as a member of the board, it wasn't a board — it was a dictatorship run by John McKinstry," McAninch says.

McKinstry regularly ignored the board's decisions, spent the organization's money on $40,000 German bands and regularly clashed with vendors and neighborhood groups, McAninch says. One example, the attorney says, was the VIP tickets in 2014. The board decided to use holograms on the pricey passes to make them easier to track and to prevent fraud. Unbeknownst to the board, McKinstry dished dozens, maybe 100 or more, to his friends and associates, McAninch says.

Meanwhile, lawsuits were piling up as creditors big and small claimed they weren't being paid. (Beyond the brief statement posted yesterday on their website, the McKinstrys did not respond to our requests for comment.)

"If you look in John's past, it's like a little, miniature bald tornado that just sort of goes through and wrecks relationships, businesses, organizations — the whole nine yards," McAninch says.

The organization's tax filings from 2014 (the most recent available online) and previous years claim growing annual losses that topped $83,000 in 2014, despite reported ticket sales of more than $660,000.

If creditors sued, they found it difficult to find McKinstry, according to court records. When they finally located him, Natalia McKinstry would hit them with a flurry of defenses and counterclaims. Credit card companies trying to collect payments acted in "bad faith," pages of a rental company's contract were "illegible" and bill collectors who called Natalia McKinstry's law office had "disabled" her answering machine by "leaving voicemail messages," she wrote in court filings.

When a process server visited the couple's Benton Park home, Natalia McKinstry claimed the server "trespassed" on their property and defamed them by reporting that the house looked vacant.

McAninch says he requested a forensic audit, but McKinstry wouldn't even show him the books. When the attorney left the board, he offered to license the festival's name and run it with a production company, but McKinstry refused. At one point, McKinstry was in discussions with the Soulard Business Association about them taking over the event even as his organization kept some share of the proceeds, but negotiations stalled.

The newly retooled, pared-back event hosted by the business association is being planned for October 21 and 22 in Soulard Park, where McKinstry started out twelve years ago. Unlike the massive festivals of the past, this one is expected to be free to the public.