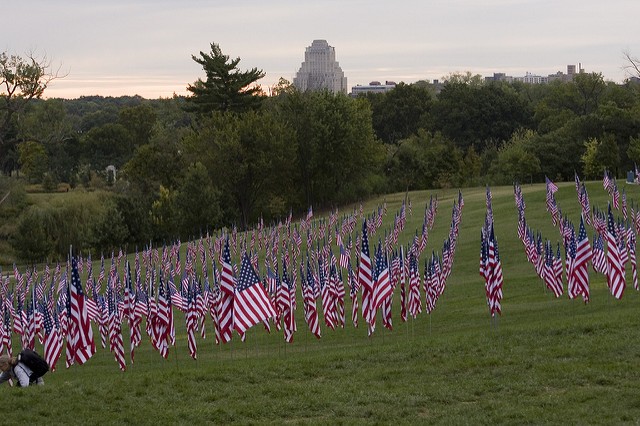 Fifteen years after terrorists attacks took down the Twin Towers and crashed two other commercial aircraft, killing 2,996, St. Louis will commemorate the attacks with 7,000 flags on Art Hill in Forest Park.

The flags will honor the American service men and women who've been killed fighting the War on Terror.

"Each and every flag in the War memorial will bear the name and photo of a hero who bravely served their country but never came home," the organizers said in a press release. "The flags will be placed in chronological order according to the date each of the Veterans lost their livesand will allow loved ones and visitors to walk through the massive display so they can easily find and honor each hero."

The display is being organized by America's Heartland Remembers, which organized a similar display on Art Hill for the fifth and tenth anniversary of the attacks.

But this display will be much, much bigger. Instead of honoring only those killed in the September 11th attacks, this year's display will for the first time honor those killed fighting in the nation's subsequent wars — that's more than twice as many flags as previous memorials.

"And it keeps growing," says spokeswoman Scott Tripp. "Every day a soldier is killed, they're adding a flag."

Twelve teams of volunteers will be erecting the flags. All proceeds from the event will go to military-specific charities, including Missouri Military Memorial Foundation, Semper Fi Fund, Missouri Memorial Military Foundation and the Greater St. Louis Honor Flight, according to the organizers.