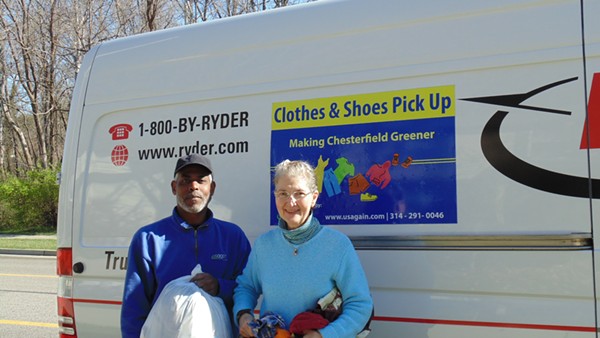 Residents of Chesterfield have been reaping the benefits of that idea since April, with a new pilot program that allows residents to get rid of their old textiles by leaving them at the end of their driveways. On a designated date, five trucks from St. Louis companies USAgain (pronounced use-again) and Republic Services canvass the west county suburb's neighborhoods, picking up the clothing that's been left for them without any charge to the people discarding it.

The program also costs the city of Chesterfield nothing. USAgain and Republic Services sell the textiles to thrift stores both in the St. Louis area and across the world, allowing the program to sustain itself.
“We run a trash route, except it's for textiles,” says USAgain's territory manager Jerry Bartley. “We actually go past every driveway in Chesterfield.”

While programs like this have been offered in other municipalities, it's always been at a cost to the resident, Bartley says. The two companies' Chesterfield program is the first he's aware of that makes the pickups completely free.

“This is the only program that is run like this in the Midwest that we’re aware of, where we service every single home,” Bartley says. “It's all about giving Chesterfield more convenience. People tend to recycle more when it's convenient, so we're trying to make it as easy as possible for them.”

The program is the brainchild of USAgain, who approached Republic Services marketing recycling coordinator Stephen Herring who already had a relationship with Chesterfield. Since April, their four runs have generated more than 20,000 pounds of textiles. Sixty percent of the textiles collected have gone to St. Louis area thrift shops, while the others have been shipped around the world, Bartley says.

Even clothes in bad condition can be recycled for many uses, Bartley says. Some will be cut down for rags, while others might go into insulation or any number of different products. Major League Baseball has even started to use ground-down textiles inside baseballs.

“Our primary goal is to keep them out of the landfill so we can cut down on CO-2 gasses. So regardless of the condition we make use of the textiles,” Bartley says. “We prefer usable so we can give it back to people in need, but we also take the things that are not useable.”

The Thursday before a pickup, Republic sends a phone blast to Chesterfield residents reminding them about the pickup. USAgain sends its trucks out to pick the textiles up, and then Republic then distributes them to the thrift shops and for other uses.

Chesterfield was the perfect place to launch the program because the city is known for its sustainable mindset, Herring says.

“This is a pilot program, so what we’re kind of doing is figuring out the best formula to make this process work, be financially viable for everybody and keep this thing going," Herring says.

In the first few months of operation, collection days brought in 6,157 pounds of textiles in April and 6,511 pounds in May. Going forward, though, they'll be reducing to a quarterly pickup instead of monthly, with the next pickup day on October 1. The hope is that a quarterly pickup will keep the program self-sustainable.

“If we do it quarterly, we feel the numbers will come up a bit. And the whole idea is to keep it free and keep people interested in recycling,” Bartley says.

Republic handles trash pickup for more than 40 municipalities in the St. Louis region. That offers future opportunities to spread the program throughout the area, Herring says.

But that doesn't mean they're coming to your neighborhood just yet.

“We’re trying to work all the bugs out of it to make it viable going forward,” Bartley says. 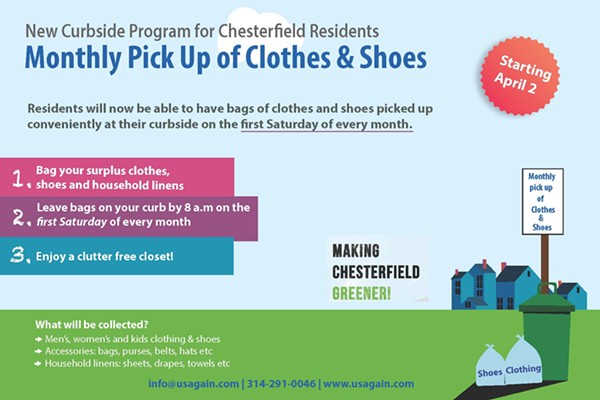