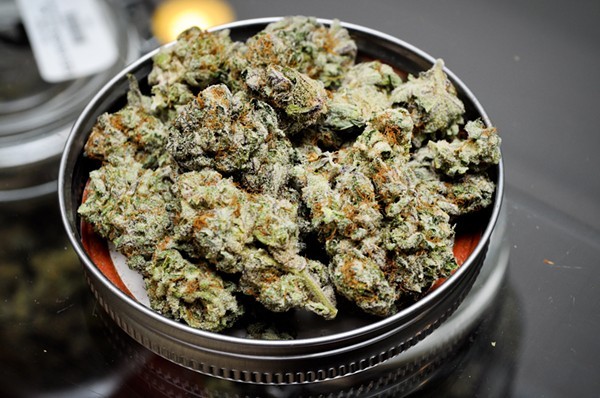 It looked like 2016 might finally be the year for medical marijuana to gain a legal foothold in Missouri.

Opinion polls suggested the state might finally be ready to join places like Colorado. New Approach Missouri, the group formed to bring a ballot initiative to voters in November, raked in an astonishing $1.3 million in contributions as of July 15. Even a Sinquefield — Luke Sinquefield, son of Rex and resident of Pacific Palisades, California — signed on in support.

But this morning, Secretary of State Jason Kander announced that he had rejected the group's ballot-placement effort. They simply didn't have enough signatures.

Under the law, a group trying to place an initiative on Missouri ballots must gather signatures from a certain percentage of voters in six of the state's eight congressional districts. Kander says the pro-pot group only made the grade in five — enough to bar it from the ballot.

The shortfall in the state's Second Congressional District, which includes St. Louis, St. Charles and Jefferson counties, appears to have surprised organizers. They gathered 40,745 signatures there, according to Kander — but only 30,095 were valid. That is just 2,242 signatures short.

New Approach Missouri told the Columbia Daily Tribune it would be filing a lawsuit to challenge Kander's ruling.

Dan Viets, secretary of the group, told the Daily Tribune he was sure they could still make it on the ballot. “It is just another bump in the road. The odds are pretty good that we will still be on the ballot.”

Campaign finance reports show that a group called PCI Consultants of Calabasas, California, has been paid nearly $256,000 through July 15 for its work gathering signatures. Comparing their work to other groups that successfully won placement on the November ballot, it appears that they simply failed to account for the normal rate of signature failure — three initiatives that Kander has approved for November ballots each submitted at least 46,000 signatures in the Second Congressional District, creating a much more comfortable margin of error.

Jack Cardetti, a spokesman for New Approach Missouri, says he is confident the pro-pot forces will prevail in time to get the measure on the ballot. He cited four previous cases when campaigns have been able to convince courts to overrule the Secretary of State's office.

"You don't go to the trouble of suing unless you think you can make it," he says. "And the courts have long given leeway to the idea that voters should decide these matters."

Cardetti noted that the group had a pool of 10,700 discarded signatures to work with — if the campaign can show that just one-fifth of those were wrongfully struck, certification should follow.

Editor's note: We updated this story at 1:45 p.m. to include more detail about the signature shortfall in the Second District. We updated it again at 4:20 (heh heh) after hearing from Jack Cardetti.