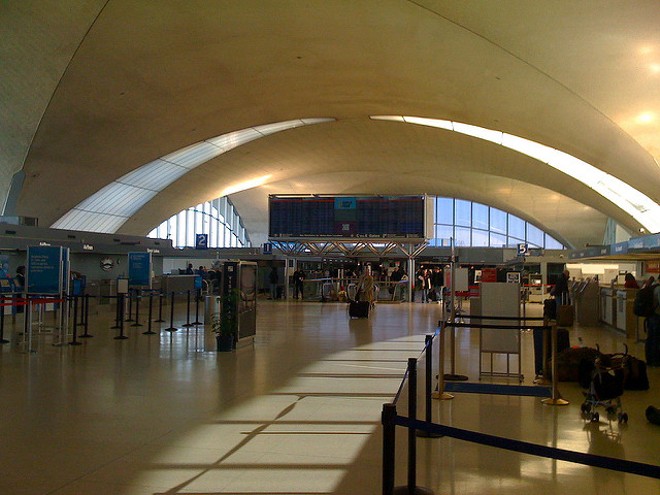 So the braintrust that runs Lambert-St. Louis International Airport has spent $8,500 to determine that the place needs a new name. Something that puts St. Louis first. Something that sells the city!

Tasked with those goals, the airport commission came up with a real snoozer of a moniker, as the Post-Dispatch reported last week: St. Louis International Airport at Lambert Field. All well and good, but pardon us if we seem a bit underwhelmed. Shouldn't $8,500 buy you a little glitz and glamour?

With that in mind, we offer up a few modest proposals for a more exciting new name for St. Louis' airport. And guess what? We're not even going to charge the commission for our hours of work. No need to thank us; just a matter of civic duty.

Without further ado, here are our top ten picks:

9. The 170 Snarler
Doesn't matter how empty the airport is. It's always the highways nearby it that suffer.

8. The Polyhedron
Get it?

7. The Best Planes in Baseball
If Cards fans can give themselves a senior superlative, why not our local airline crews?

6. Kroenke Memorial Airport
He doesn't really have anything to do with it, but feel free to curse his name while stuck on the tarmac.

5. Gerard Aircrafts
"Heard about the St. Louis chef who won a James Beard Award? No? Can we tell you a bit more about our amazing food scene?"

4. Radio Shack
Too good a name to waste now that the company is bankrupt.

2. Airplane Village Pretty soon all its competitor airports will be driven out of business!

Because a good roll to the noggin is much more fun than a lousy flight to Omaha.