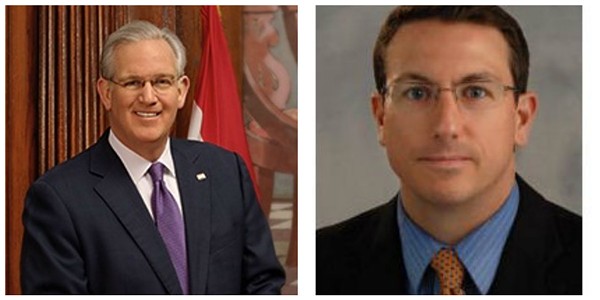 You almost had to feel bad for Jay Nixon. Everywhere you looked at the end of last week — CNN, The Washington Post, NPR — Missouri’s governor was getting punked by a little-known state official, who had ordered him to report to court to represent an indigent criminal defendant. The governor almost surely hadn't seen it coming.

For years, Nixon has pissed off the people running the Missouri State Public Defender System with impunity. The supposedly tough-on-crime Democrat — yes to the death penalty; no to clemency — has repeatedly and with little to no political consequence rejected pleas to put enough money into the legal defense of the state’s poor to give them a fair shot in court.

Michael Barrett, director of the Missouri’s public defender system, says it’s easy to see the results if anyone cares to look. Missouri ranks 49th in the nation when it comes to funding public defenders — and it ranks eighth in the rate of incarceration.

“The correlation is stark,” Barrett tells the Riverfront Times, adding that more than 40 percent of the prisoners Missouri is paying to keep locked up are non-violent. “If we had the resources, we could keep a lot of these guys out, and actually they could be contributing to the tax base instead of relying on the tax base.”

But while Barrett's argument may seem financially reasonable and ethically sound, it’s a tough sell to a crime-weary population. It’s always been easier and more politically popular to lock people up. That goes double for a state where voters listened to the Republican gubernatorial candidates rail against “dangerous Syrian immigrants” and Ferguson protesters for weeks, ultimately selecting the guy who displayed literal firepower in his campaign ads.

Earlier this year, Barrett and the Missouri State Public Defender Commission requested a $23 million increase to provide competent (and constitutionally mandated) legal representation of indigent defendants. The legislature signed off on $4.5 million. But Nixon decided even that was too much and blocked all but $1 million.

The commission sent the governor a letter on July 8 requesting a meeting or at least a response by July 13. Barrett says they were ignored. They sued Nixon on July 13, challenging the constitutionality of restricting the funds, and he still he didn’t budge. Normally, that would seem all the director and commission could do. Nixon could stiff-arm them and go about his business. Aside from low-level media coverage, he wouldn’t face any public backlash.

On August 2, the Bronx-raised former Defense Department interrogator sent Nixon a letter that was a master class in political trolling.

Barrett reminded the governor of the dismal job Missouri does to defend the poor and of Nixon’s history of blocking his office’s efforts to make it better. And then he mentioned a provision in state law that allows the director to delegate cases to any member of the state bar.

Barrett had never used that power, he told Nixon, because it didn’t seem right to shift the state’s constitutionally mandated responsibility to private attorneys who had their own problems. “However, given the extraordinary circumstances that compel me to entertain any and all venues for relief, it strikes me that I should begin with the one attorney in the state who not only created this problem, but is in a unique position to address it,” Barrett wrote in what would become a much-quoted passage.

If Nixon read the letter, this was probably the point when he began to realize what Barrett had in mind for him. In retrospect it seems almost cinematic, like the moment the big guy realizes — ten seconds too late — that the little guy he’s been pushing to the brink has in fact studied Muay Thai his entire life.

“Therefore,” Barrett continued, “pursuant to Section 600.042.5 and as Director of the Missouri State Public Defender System tasked with carrying out the State’s obligation to ensure that poor people who face incarceration are afforded competent counsel in their defense, I hereby appoint you, Jeremiah W. (Jay) Nixon, Bar No. 29603, to enter your appearance as counsel of record in the attached case.”

Governor Nixon, possibly the most high-powered attorney in the state, was being deputized to work as a public defender on an assault case in Cole County.

Barrett released the letter to the world the next day via the public defender website. Hilarity ensued. The idea of a sitting governor descending the capitol steps to wedge into a crowded county courthouse, waiting through a string of DWI and shoplifting first appearances for a bored clerk to call his case, was particularly delicious for current and former public defenders.

A criminal defense attorney in Massachusetts named Keren Goldenberg put out a call on Twitter.

A list of rookie mistakes flooded in — from clients asking to see a “real lawyer” to hazing from court officers to arguing motions with his fly open.

“Forgets casefile in executive office, has to walk back,” read one gleeful tweet. “Now locked out of building and banging on glass to be let in.”

@GoldenbergLaw Forgets casefile in executive office, has to walk back. Now locked out of building and banging on glass to be let in.

The governor’s response was the politician’s equivalent of “didn’t hurt.” His spokesman issued a statement saying the public defender’s budget had increased fifteen percent, even as the state has had to cut employees in other departments.

“That being said, it is well established that the public defender does not have the legal authority to appoint private counsel,” Nixon communications director Scott Holste wrote. Barrett points out his costs have increased eighteen percent, and that fifteen percent includes statewide pay hikes and increased bar fees. Adjusted for inflation, the public defender system's funding has actually decreased since 2009, he says.

“He’s having a little fun with math,” Barrett says of Nixon.

Without more money, Barrett says, he’ll have to consider closing offices, further weakening a system that outside examiners have flagged again and again as brutally inadequate.

An assessment conducted by legal experts at George Mason University in 2009 warned Missouri’s system was “on the brink of collapse.”

The American Bar Association found in 2014 the state’s public defenders spent an average of less than nine hours total on cases (excluding homicides) involving serious felonies — less than a fifth of what the association recommends.

A Justice Department evaluation in 2015 of juvenile cases in St. Louis County found the constitutional rights of black kids were routinely abused as a result of the state public defender system’s “chronic budget crisis.” The one attorney assigned to handle juvenile cases in the county had an annual load of nearly 400 cases.

The federal assessors wrote that the system “continues to be stretched beyond reasonable capacity despite its repeated warnings about the dire consequences this poses for indigent defendants.”

It plays out in all sorts of terrible ways, Barrett says. Think about defendants who can’t make even meager bail while awaiting trial. “So what happens is they’re sitting in local jail, and because we have too many darn cases, we can’t get to their cases fast enough, and they end up being coerced — just to see daylight — into taking a plea just to get out of local jail,” Barrett says. “Now people are unnecessarily taking pleas to felonies, and it’s affecting them. They can’t get jobs, and the problem continues.”

And as the Justice Department found in its report on St. Louis County family court, it's poor black defendants who take the biggest hit — an assessment echoed by ArchCity Defenders. The St. Louis-based nonprofit was founded seven years ago to help the thousands of people who can’t afford private attorneys and need help the state just isn’t providing. “It's deplorable that the governor has failed to fund constitutionally required defense for those who cannot afford it,” ArchCity Executive Director Thomas Harvey says in a statement. “Ultimately, these actions hurt poor people and black people more than anyone else — continuing our nation's long history and exposing the state of Missouri to serious litigation that we're seeing all around the country."

Legal scholars disagree on whether Nixon will have to show up for the court case. It is is not necessarily “well-established” that consent is required, as the governor's spokesman claimed. But there also seems to be little precedent for forcing a lawyer to take a case against his will.

In any event, it would be surprising if Nixon ended up the attorney of record here, and Barrett made sure to pick a defendant who’d bonded out and wouldn’t be stuck in jail waiting on the governor to appear. But the stunt has already succeeded in illuminating a fundamental problem — even if it did require humiliating the governor in front of a national audience.

Barrett says he just didn’t know what else to do.

“We’re here,” he says, “because we’ve exhausted every other remedy.”