Greitens Blasts His Way Through GOP Primary, Setting up Showdown with Koster for Missouri Governor 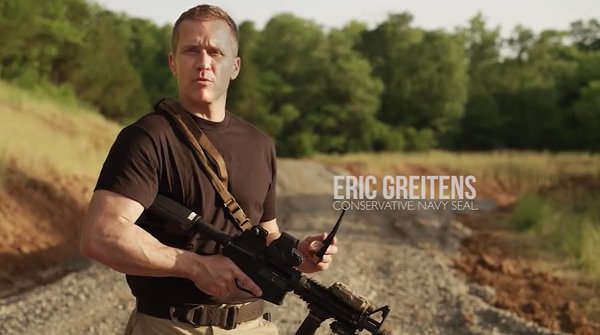 When Greitens announced his intention to run for governor in April last year — on The Daily Show of all places — he was a nobody on the Missouri political scene, with zero name recognition outside of his work helping veterans. How the tides have changed. As the election returns came in Tuesday night, Greitens' opponents — former Missouri House Speaker Catherine Hanaway, businessman John Brunner and Lieutenant Governor Peter Kinder — each conceded the race early in the night.

In the days leading up to the primary, polls showed the four candidates as equally matched, statistically speaking. When the vote tally finally came in, Greitens had taken 34 percent.

"I know how hard my opponents fought," Greitens said during his victory speech. "I say to you, congratulations on a hard fight. You left it all in the ring."

That's putting it lightly. While the campaign ads may not have reached the stomach-churning benchmarks set in other races, Greitens and his opponents spent much of their time attempting to tear down each other's conservative bona fides. Things got particularly nasty between Greitens and Brunner, especially after Brunner published a recording of a phone call featuring Greitens losing his cool and repeatedly telling Brunner he was a "weasel" for avoiding a meeting.

The coming showdown between Greitens and Koster should prove dramatic on multiple fronts. Greitens, a one-time Democrat, jumped ship to the GOP, citing what he saw as the party's failure to improve the broken VA system. On the other hand, Koster was a Republican until 2007. Koster turned blue after clashing with the GOP over stem-cell research and labor issues.

There's also the matter of money. Koster is sitting on a campaign war chest of more than $10 million, and Greitens recently set the record for the accepting the largest individual campaign contribution in Missouri history. Some observers are already getting their popcorn ready for a nasty and expensive slugging match leading up to the November 8 general election.

It's also worth noting that this is the first statewide election lost by Peter Kinder, who has served three terms as lieutenant governor and lost to Greitens last night.