Senator Roy Blunt Is a Coward 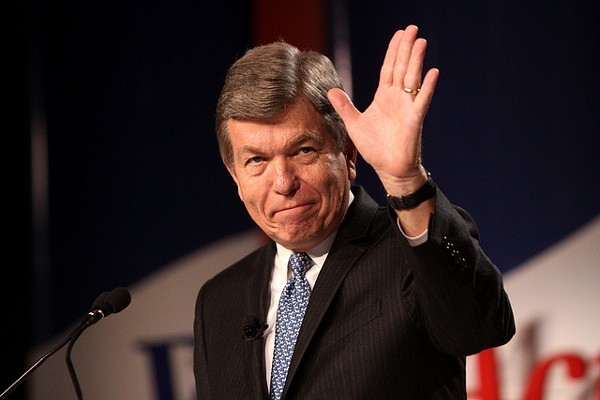 On Monday, Missouri Senator Roy Blunt joined a growing number of his fellow Republican leaders in criticizing Donald Trump's disrespectful remarks about Khizr and Ghazala Khan, the parents of fallen U.S. Army Captain Humayun Khan, who was killed by a suicide car bomb at age 27 while serving in Iraq. Even as Republicans all over the nation condemned the remarks, however, our junior senator opted for the most milktoasty expression imaginable — choosing to offer polite advice to Trump rather than the sort of outright condemnation that was de rigueur from coast to coast.

The Khans famously criticized Trump at last week's Democratic National Convention in Philadelphia, noting that his Muslim ban would have barred their son from citizenship, much less military service.

“If it was up to Donald Trump, [Humayun] never would have been in America,” Khizr Khan said. Of Trump, he added, “You have sacrificed nothing and no one.”

Trump then, predictably, stepped in dog shit, dragged it into the house and smeared it all over the carpet, attacking the grieving parents and implying that Khizr's wife did not speak because her Muslim religion did not allow her to do so. (Ghazala fired back quickly with an op-ed published Sunday by the Washington Post, explaining that she chose not to speak because her grief over her slain son is so deep.)

Trump, thumbs all a-Twitter, managed to stretch the shitshow through the entire weekend with a series of ill-conceived tweets, all while his running mate stayed silent and got a haircut.

Mr. Khan, who does not know me, viciously attacked me from the stage of the DNC and is now all over T.V. doing the same - Nice!

By Monday morning, Republicans were lining up to condemn Trump's remarks — disparaging the family of a war hero, after all, is generally thought of as a no-no.

"I cannot emphasize enough how deeply I disagree with Mr. Trump’s statement," Senator John McCain (R-Arizona) said. "I hope Americans understand that the remarks do not represent the views of our Republican Party, its officers or candidates."

"If you're going to be leader of the free world, you have to be able to accept criticism. Mr. Trump can't," said Senator Lindsay Graham (R-South Carolina). "The problem is, 'unacceptable' doesn't even begin to describe it."

"The Khan family deserves nothing less than our deepest support, respect, and gratitude, and they have every right to express themselves in any way they choose," said Senator Kelly Ayotte (R-New Hampshire). "I am appalled that Donald Trump would disparage them and that he had the gall to compare his own sacrifices to those of a Gold Star family."

Even top GOP brass — Senate Majority Leader Mitch McConnell and Speaker of the House Paul Ryan — issued statements condemning the remarks, though they stopped short of pulling their endorsements from the person who spoke them.

And that's the same (frankly gutless) tactic that our own Senator Roy Blunt went with as well: passively criticizing the remarks while tepidly continuing to endorse the speaker.

"I remember how much I worried about my son Matt during his years of active duty,” Blunt said in a written statement. “The Khans have made the greatest possible sacrifice for our country; they deserve to be heard and respected. My advice to Donald Trump has been and will continue to be to focus on jobs and national security and stop responding to every criticism, whether it's from a grieving family or Hillary Clinton."

When the Post-Dispatch followed up on the statement, asking if Blunt was withdrawing his endorsement of Trump, Blunt spokesman Tate O'Connor replied with a one-word email that we hope will forever echo throughout the annals of history, doggedly following the Senator for the rest of his days: "No."

Blunt is up for re-election this November, in an increasingly heated battle with Democratic challenger Jason Kander.

Kander spokesman Chris Hayden issued a statement in response to Blunt's remarks: "Even when he knows Donald Trump is wrong, Senator Blunt refuses to challenge him. Offering Donald Trump political advice is not the same thing as rebuking his horrible comments about a war hero's family."

You'd think that the father of a veteran would get that. Apparently, though, the younger Blunt's courage came from his mom's side.