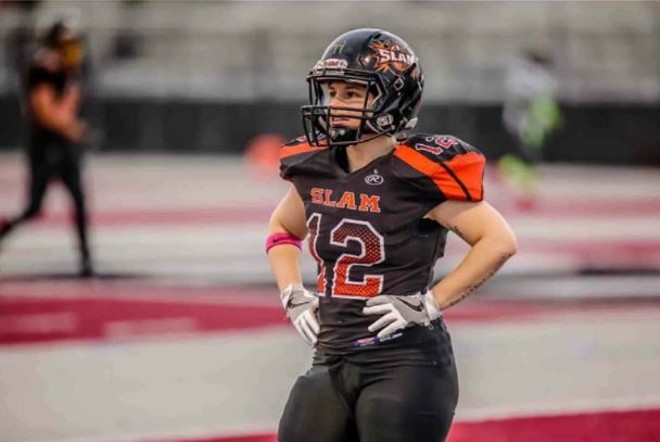 It's been a long time since St. Louis could boast about its football prowess. Sure, there was that one team that did some nice things on the field — but that might as well be ancient history.

These days, if you want football excellence in St. Louis, it's all about the SLAM, the city's all-female, full-contact football team. On Friday, the gals on the gridiron bulldozed their way to a Women's Football Alliance Tier II championship, obliterating the Tampa Bay Inferno 38-7.

The win marks the second SLAM national championship since 2009. After losing two of its first three games, the team came on strong in the season's second half. The SLAM ripped off three consecutive blowout wins, handled two post-season opponents in similarly commanding fashion and made quick work of the undefeated Inferno.

The entire game is available to watch here. If you're looking for highlights, scroll to 31:39 to watch Danielle Brock execute a nifty jet sweep for a touchdown, and then fast-forward to 1:02:50 to see Brock snag an interception out of the sky.

Obviously, Pugh and the rest of the 36-strong roster aren't making endorsement deals or shooting commercials during the off-season. Players are not paid.

"We’re working, people have children and school, so it's hard to balance all of that. It's mentally, emotionally and psychically exhausting," says Pugh.

Still, nothing helps sore muscles like a big win. Running back Taylor Hay, who scored the SLAM's first touchdown of the game, says the victory is all the more significant because much of the roster isn't just new to football, but to team sports in general.

Hay hopes that more women — regardless of body type — pick up a helmet and pads in the future.

"Don’t hesitate. If you don’t have any athletic background, that’s OK," Hay says. "There’s a lot sports where you have to be a certain build. And with football you don’t. It’s just one of those sports where anyone can be successful, no matter your shape, size, how fast you are and how fast you aren’t. You find a way."
Follow Danny Wicentowski on Twitter at @D_Towski. E-mail the author at Danny.Wicentowski@RiverfrontTimes.com