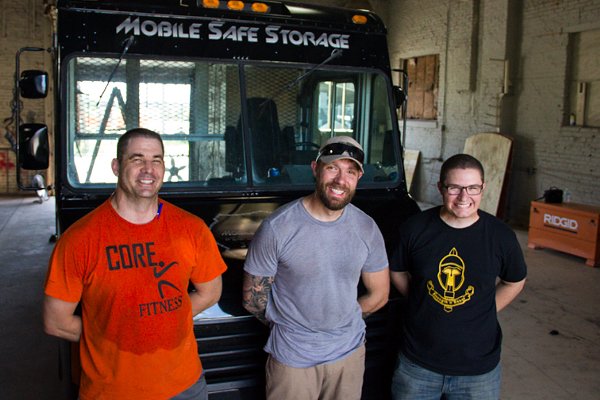 "People want to use this service," says a frustrated Hulsey, who has been pushing for months to launch a mobile gun storage business that would allow Cardinals fans to deposit their pieces before entering the gun-free-zone of Busch Stadium. Last month, Hulsey told Riverfront Times that the service was ready for its debut and that he'd negotiated a deal to park a 22-foot-long armored truck on a lot owned by the bar Paddy O's.

Those plans fell apart. On Thursday last week, Hulsey says Paddy O's backed out of the partnership, citing a threat to the bar's occupancy permit. The next day, on Friday, city inspectors showed up to the newly leased downtown garage that serves as home base for Hulsey's business ventures. The inspectors claimed to find a laundry list of violations that would prevent the city from issuing Hulsey's company, Weapon Safe Armory, an occupancy permit.

"They’re just throwing up roadblocks," Hulsey says. "All I’m trying to do is getting a business up and running."

His goal has proven elusive. And Hulsey contends that St. Louis powers-that-be don't want his business to get off the ground.

Over the weekend, he launched a online petition drive to build public support. The petition alleges that city officials denied Hulsey a street vending license "without due process."

That's not quite accurate, says Maggie Crane, a spokeswoman for Mayor Francis Slay. She says that Hulsey never even filed an application to obtain a street vending license, as his petition claims. As for Hulsey's broader accusations — that the city has it out for him and his gun truck business — she says the city doesn't know enough about his business to comment yet.

"The City has an appeals process for anyone who believes they are unfairly denied a permit," Crane says. "Which, of course, doesn't apply to him because he's never applied for a permit, nor a business license."

Hulsey acknowledges that he never formally applied for a street vending license, but that's only because an employee in the License Collector's Office warned him that he has no shot. The office can't license a business that doesn't sell a "tangible object," he says he was told. And even if he filed an application tomorrow, Hulsey says he's still contending with problems related to obtaining an occupancy permit for his garage.

Placing the armored truck on Paddy O's parking lot had been intended only as a stopgap measure until Hulsey could obtain a street vending license — which would conceivably allow him to deploy the black-painted van to the same areas utilized by food trucks. But now even his backup plan has fallen apart.

Despite the challenges and controversy, Hulsey remains undeterred. Since Friday, he says he received dozens of emails from supporters and potential customers. Some told him they cancelled trips to the game after learning Husley wouldn't be there to safeguard their firearms.

"They’re trying to bend me, trying to get me to stop," Hulsey says of obstacles he's encountered in St. Louis' permitting processes. "But if we get all of us together, we’re not going to break. And that’s when they’ll be forced to deal with it."