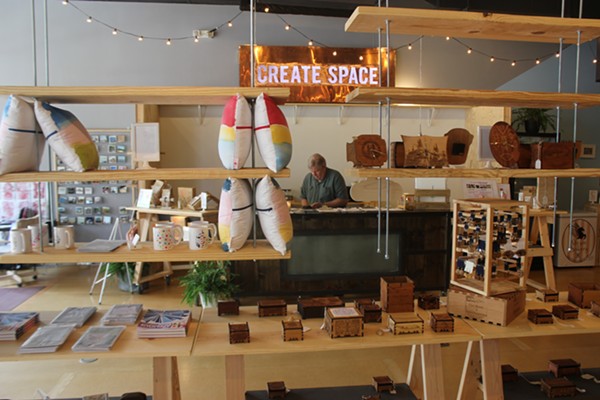 In February, hundreds of people flowed through a sprawling Delmar Loop storefront. Urban Chestnut had brewed a specialty beer with ginger extract called Moon Monkey for the event, and the crowd was heavy on artists and budding entrepreneurs who came in part to celebrate the Lunar New Year but also to get a first look at the future home of a new retail store/workshop/business incubator called Create Space that was to cater the St. Louis area's growing "creative economy."

Create Space has taken off in the months since with craft workers and artists selling their pieces from within the wide-open showroom as they learn how to run their small businesses through on-site classes in marketing, branding, legal and more. There are plans for sister operations called Kitchen Space and Make Space on Olive Boulevard.

But now the operation's founders say they've become collateral damage in a city council battle that has nothing to do with them.

"Ultimately, they're hurting the community over petty political food fights, and that's unacceptable," says Julia Li, founder of the parent organization of the three Space projects.

Li and her board were counting on a $150,000 grant from University City, drawn from a quarter-cent sales tax set aside for economic development projects in the city. It was an unusually large award for the fund, but a citizen board that vets applicants for the Economic Development Retail Sales Tax revenue was so impressed by the Space proposal they recommended funding the request at 100 percent.

The board is advisory, but its recommendations have usually been approved — albeit with minor adjustments — by the city council in the past. The recommendations are typically added as amendments to a draft budget that is voted on in June.

This year, however, a faction of the council voted against the entire revised budget. The move has forced the city to adopt the original draft, sans amendments — affecting economic development grants not just for the Space projects, but also a slate of other operations, including the University Chamber of Commerce, U City in Bloom and a downtown farmers market.

Mayor Shelley Welsch says the effect will be devastating if the council continues to fight against funding the programs. It has the potential to push projects like Create Space out of the city while also sending a chilling message to other entrepreneurs, who might now think twice about setting up shop in U. City.

"If that happens, it will be a sad, sad day for U. City," Welsch says.

"By defunding Create Space, you are sending a message loud and clear to a network of thousands of entrepreneurs that they are not valued by University City," Wiggins wrote.

And the impact of the budget decision are real. Currently, construction on the Olive location that will house a commercial kitchen and industrial equipment, such as laser cutters and 3-D printers, is 40 percent finished, but it will stall without funding, Wiggins told the Riverfront Times.

She has fought and won similar battles before. When Wiggins' hometown of O'Fallon tried to wrest the Strange Folk Festival from her, she fired back on social media, rallying hundreds of artisans and craft workers to her side. The city government eventually backed down. She is now preparing to host the festival in St. Louis city's Lafayette Square neighborhood.

In her open letter, she makes it clear the city council would be wise to reconsider pitting themselves against the makers.

"The last time that happened, social media scorched the Earth of the offending municipality," she writes. "Maybe a risk you have not assessed?"

While the budget vote hits a wide swath of programs, Li and Create Space were named specifically in the case against its passage. Critics raided Li's Facebook page, pulling screenshots of her posts to use as evidence she wasn't ready for this kind of project.

Councilwoman Paulette Carr is leading the charge. She has repeatedly noted Li's age — 27 — in painting her as a novice with an "unproven track record." She claims the real amount of money in question is $250,000, not $150,000. The $100,000 difference reflects money that was previously earmarked for Kitchen Space through a fund set aside for development along Olive.

"Have our city officials decided to risk $250,000 of our taxpayer money on Ms. Li, who has a limited track record as a successful 'entrepreneur?'" Carr wrote in a newsletter to constituents.

Carr is a frequent opponent of Mayor Welsch on the council. She had been in the minority until Councilman Stephen Kraft resigned his seat in May, leaving the council with six voting members, and the potential for endless gridlock.

Carr tells the RFT her concerns are not political but economic. She says she simply wasn't impressed with Li's pitch to the council.

"Instead of standing before the council with tears in her eyes to talk about her immigrant status and the benefits to herself and other artists who may or may not be residents, I would have preferred she discussed her business plan and the real benefits she projects that would accrue to the City of University City for making this level of financial donation," Carr says in an email.

The councilwoman added that Li's Facebook posts were of "great concern," and she filed a motion to send the proposal back to the Economic Development Retail Sales Tax board for another look.

Li says she and her partners only want to run their projects, help entrepreneurs and add jobs and businesses to University City, where she lives and has helped expand her family business, Lulu Seafood. She says the Space team has never wanted to get involved in politics, and she was alarmed opponents would search and screenshot her Facebook posts.

The Facebook posts in question — in which she says she's "burned out" and plans to travel and focus on her well-being — followed a health scare, she says. Doctors had discovered a benign brain tumor, and it had been a difficult time, says Li, who has worked for Disney and Nickelodeon along with her family's restaurant business.

She points out that the money from the Economic Development Retail Sales Tax fund, as well the money for development on Olive, are set aside by city ordinance to go toward projects such as hers. If the council doesn't fund the projects, the money just sits.

The council will meet again on July 25, and Welsch says she will try to push funding for Create Space and the other organizations forward. Li is hopeful they can persuade at least one council member to switch his vote and support the projects.

"Autumn is very passionate about makers, and so am I," she says. "We're not going to let them destroy us."