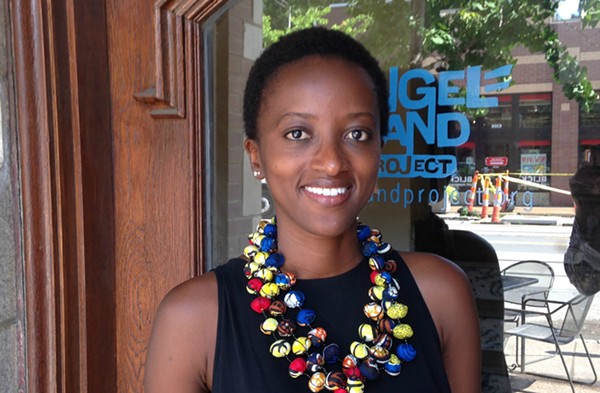 Recently hired as executive director of the Missouri Immigration and Refugees Advocates, she grew up in Nashville and Nairobi after fleeing as a twelve-year-old from the sudden slaughter of roughly a million people in her home country of Rwanda.

The 33-year-old says she is one of the few people her age who escaped the 100-day Rwandan genocide with their families intact. They still had plenty of close calls.

"You hide — ceilings, cornfields," she says of their survival strategy. "You have friends who are actually loyal."

Abizera's experience then and in the years after — living on temporary status in Kenya and then waiting out the long process to enter the United States while her father sought asylum in Tennessee — informs the work she hopes to do with MIRA. The ten-year-old coalition marshals about 40 immigration and advocacy organizations across the state to push for what they describe as "compassionate" reform of immigration laws.

MIRA lobbies regularly in Jefferson City and stages education forums and campaigns across the state.

Abizera had done similar work with advocacy groups in Nashville before joining her fiance, a cardiology fellow at Saint Louis University, a month ago in south city.

She's still feeling her way around her new home. She and her fiance have been trying out the international restaurants along South Grand, and she is already a regular shopper at the Seafood City supermarket in University City's Chinatown.

Getting a handle on MIRA's work will be even more daunting. Abizera, who started on July 1, has set aside her first 90 days to learn both the daily operations and larger landscape. Immigration has already become a focal point of state and national elections as conservative candidates stoke fears of terrorists stowing away among Syrian refugees and Donald Trump repeats his improbable promise to build a wall between the United States and Mexico.

"I say America is having a humanitarian crisis," Abizera says. People don't know how hard it is for immigrants and refugees to enter the country and then to find their way, she says. Her own life is an example: Her father lived apart from her family for two years before he could secure clearance to bring Abizera, her four siblings and her mother to join him in Tennessee.

Once here, newcomers often can't work in their profession without submitting to maddeningly arduous and expensive re-licensing procedures. Abizera says it's important to educate people on the issues and the contributions immigrants and refugees make.

"We hear the negative side of having refugees," she says. "We don't hear the good stuff."

Abizera, who is a naturalized citizen, is hopeful MIRA can educate enough people and put enough pressure on legislators to make a change.

"There is power in numbers," she says. "If we can start advocating on the grassroots level, there's more noise in Jefferson City."