Post-Dispatch Apologizes for 'Timing' of Cartoon That Angered FOP

The timing simply couldn't have been worse.

On July 8, the morning after five police officers were shot dead in Dallas, Texas, victims of a sniper targeting law enforcement, the St. Louis Post-Dispatch ran a syndicated cartoon in which a police officer asks a pharmacist for something to help his "itchy trigger finger."


The cartoon, by Massachusetts-based artist Dave Granlund, was in response to high-profile shootings in Baton Rouge, Louisiana, and St. Paul, Minnesota, earlier in the week. Those shootings — which left two black men dead — had left the nation reeling.

But then on Thursday night, the narrative abruptly shifted. At a rally to protest those killings, a sniper angry at police opened fire and managed to kill five officers and wound seven others. It was the single deadliest day for law enforcement since September 11, 2001.

And that made Friday morning — July 8 — a very awkward time to be running a cartoon critical of the police.

The Missouri Fraternal Order of Police blasted the cartoon on its Facebook page over the weekend, with past president Kevin Ahlbrand writing that it was "the most insensitive action I have seen a heralded newspaper commit." 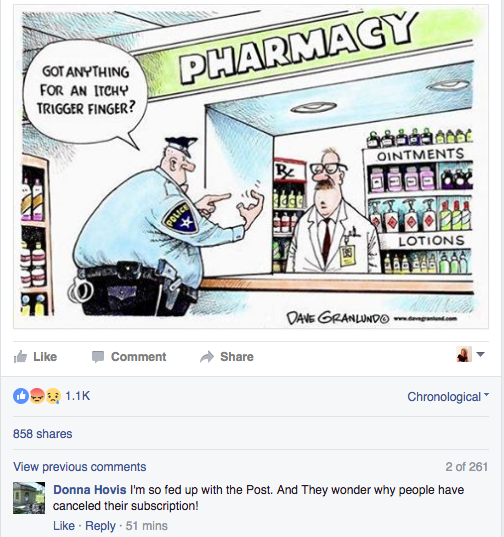 In his post, Ahlbrand wrote that he'd been contacted for an interview by veteran Post-Dispatch reporter Jeremy Kohler.


I have known Jeremy for over 10 years and have done numerous interviews with him but I advised him that due to the Post Dispatch editorial boards egregious actions, I would not speak with him.

You may not know, but I served on the Ferguson Commission and frequently speak on law enforcement issues and am active on seeking solutions. I continue to serve on the Forward Through Ferguson board. The Missouri Fraternal order of police will not speak to your paper until you apologize for that extremely poor taste cartoon. Please search your files and see how many times we have actively participated in interviews with your paper. I am so disheartened that the only daily in St. Louis has chosen to target those who put their lives on the lines protecting YOU every day.

The fraternal organization's post drew 854 shares, and more than 1,000 likes.

Yesterday, the paper issued a brief message attempting to walk back a bit from the cartoon's publication — but only to the extent that it so closely followed the Dallas attack.

"We have heard your complaints loud and clear," the editorial board began its
three-paragraph note.


The deadline for printing our newspaper sometimes crosses late-breaking events. The editorial content and cartoons are selected in advance and do not reflect breaking news.

However, the provocative message of the cartoon was ill-timed. "This newspaper’s editorial page has long supported, and continues to support, the mission of our nation’s first responders. We regret the timing of the cartoon selection, which had no deliberate association to the unfolding events in Dallas."

It's easy to see the tightrope the editorial board was walking. On one hand, the cartoon was a valid response to the shootings in St. Paul and Baton Rouge, a pointed critique of police conduct. And beyond that, the whole point of editorial cartoons is to be provocative — literally, to provoke.

Just as importantly, cartoons are like first-person columns. They're one person's view: a take that people can agree with or get angry about, but that only fail if they're too cautious to generate conversation. The editorial board has to walk a careful line as it speaks for the paper, but the best cartoonists, like the best columnists, are free to have a sharp take. They often offend.

And yet ... that timing! The sniper began shooting at 9 p.m., and within the hour it was apparent that this was a very bad situation. The editors of the nation's daily newspapers were left scrambling to figure out how to keep their front pages from being overtaken by history, a task they mostly pulled off with aplomb: Even East Coast papers managed to stop the presses and get the key details right in their morning editions.

The Post-Dispatch was no exception to that. Its July 8 front page had a banner headline announcing that four officers had been killed (the latest count at the time of its deadline) and an AP story making clear that snipers were targeting police.

Tod Robberson, the paper's editorial page editor, says the juxtaposition between the front and editorial pages was a simply case of the news breaking too late to pull the cartoon.

Himself a recent transplant from Dallas (he moved to St. Louis in late December after 19 years with the Dallas Morning News), Robberson says he only became aware of the situation around 10:15 p.m. or so, as he was heading to bed. Watching the live stream from Dallas' WFAA on his iPad, he says, the scene was "absolutely chaotic."

"The presses were rolling by that time," he says. "And the reporting was still all over the map. It was just too early to make a call on anything." (As he notes, the P-D wasn't the only paper that had already started printing. While the New York Times' New York edition included the news, its national edition did not.)

Robberson acknowledges regret over not being able to take action.

He says he's spent recent days trying to call back as many angry readers as possible (there have been many). "I feel like the people I've called back, as irate as they were, when I was able to have a nice calm conversation, they understood. They weren't happy, but they understood."

Even with that, though, Robberson doesn't consider the statement an "apology." He has no problem defending his decision to run the cartoon, he says — his only regret was any perception that it's juxtaposition with the day's events was "deliberate."

As for the Missouri Fraternal Order of Police, it's not clear if the statement will be enough to bring them back into the fold. But to some extent, the paper's cartoon selection handed the police organization a real gift: When the national conversation is increasingly focused on police treatment of black men, when even Newt Gingrich is suggesting he has sympathy for the Black Lives Matter protesters, it might be a relief to change the subject — and make someone else the bad guy for once. If nothing else, blasting the media is a whole lot savvier than trying to pin the Dallas tragedy on, say, Barack Obama.

Editor's note: We updated this story around 11:20 a.m. after connecting with Tod Robberson, the paper's editorial page editor.

Sarah Fenske is the editor in chief of the Riverfront Times. Follow her on Twitter @sarahfenske or reach out via email at sarah.fenske@riverfronttimes.com