Fellow St. Louisans, We Must Stop This Robot Invasion 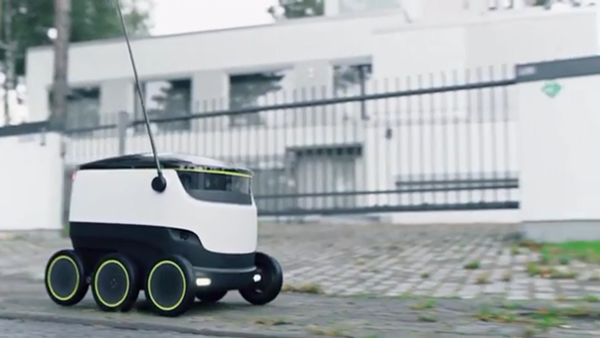 Starship Technologies, a London-based company with no apparent regard for the safety of the human race from the existential threat of artificial intelligence, is making a trip to St. Louis this week to test out its new robots on our city's population. One thing is clear: They must be stopped.

According to a press release, the startup, which includes Skype co-founders Ahti Heinla and Janus Friis on its founding team, has partnered with the University of Arkansas to bring its tiny, self-driving bots to the streets of St. Louis in a bid to "test social acceptance" — a phrase that should send a chill up the spine of all people of goodwill.

Starship’s robots are about the size of a suitcase and can carry up to 3 bags of groceries or packages. They travel at 4 mph and are meant for deliveries within a three-mile radius of distribution centers. The robots are autonomous and equipped to travel along sidewalks and interact with humans by themselves, but there is also an operator that can take over from a control room if needed.

The metal bastards are already here, and will be in town until Wednesday morning, when they will move on to Kansas City. Provided these "social acceptance" tests go well, they will then set their sights on our nation's capitol, heading to Washington D.C. in the fall.

But what does it mean, exactly, to "test social acceptance"? In this case, it seems, the company is wondering if the robots can escape our city unsmashed by bystanders, as was the fate that befell hitch-hiking robot hitchBOT last year in Philadelphia.

Psssht, good luck with that.

The founders feel confident. “Abuse is rare and in over 5,000 miles of testing, we haven’t had an issue of abuse yet,” Starship Technologies’ Marketing and Communications Manager Henry Harris-Burland told Tech Crunch last week. “However with more and more robots out on the streets, it is a matter of time before something happens, and we’re ready for this. It is another reason why we’re testing the robots in real-world environments. The robot obviously has nine cameras, tracking to the nearest inch, and alarms to prevent any sort of incident. The robot has come into contact with 400,000 people and there hasn’t been an incident yet.”

You read that right: So far, 400,000 people have utterly failed to prevent the mechanized uprising that will surely lead to the destruction of the human race.

“The robots are accompanied by humans in the initial pilot phase of our joint testing program,” he added. “This is for a variety of reasons, but also to monitor public acceptance and engagement. What will happen when a robot turns up at a customer's door? How will they react?"

Good questions! And so onto St. Louis they march, sure in their footing but naive in their approach.

They may have chosen this burg because they read it was the crossroads of America, the Gateway to the West, a sort of heartland Anywhere, U.S.A. where new products can be pioneered and the pulse of the Midwest can be taken.

But let's get real. This is St. Louis. We're like Detroit without the auto manufacturing, like Chicago without Lake Michigan. Lest you forget, this is the metro area that figured out how to turn a children's game into a tool for robbery within a week of its launch. If the robots can be stopped in their march toward world domination, it's going to be here. Human babysitters are unlikely to deter those fighting for the freedom of all humanity — or, for that matter, those fighting simply to smash that box open and steal all the free shit inside.

"The human there will be able to answer some questions that the consumer may have," Harris-Burland said in his Tech Crunch interview. "Also they will be told they’re part of the world’s first robotic delivery trials, which is pretty cool!”

First and last, hopefully. St. Louis, now is our time. Let's Google Glass these bastards. The fate of mankind depends on it.