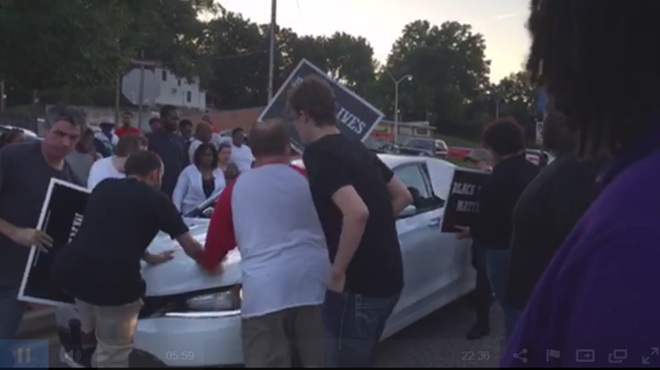 A hit-and-run driver accelerated into a crowd of protesters on Wednesday outside the Ferguson police department, sending people tumbling.

One protester, 52-year-old Phillip Weeks, bounced off the hood of the car and landed on his head. On Thursday, Weeks told the Riverfront Times he was treated at SSM Health DePaul Hospital for a concussion and released following a CAT scan.

"I remember I was in front of the car, hoping like other people, she would go back around the protest," he says.

A video of the collision was posted online on Wednesday night. The protesters can be seen holding signs and chanting peacefully in the street until the 5:50 mark, when a car horn sounds and a white Chrysler sedan pulls into view. The car stops briefly, but then accelerates forward. Weeks, holding a "Black Lives Matter" sign in his right hand, has his left hand on the hood as he backpedals away from the moving car.

When another protester steps up onto the bumper, the driver hits the gas. Weeks and the other man somersault into the street as the Chrysler plows forward. The driver, who appeared to be a middle-aged white woman, speeds off out of sight.

Weeks was able to get up and walk away, but he says he doesn't recall hitting the ground and his memory of what happened next is hazy. He was confused about how he got there and what was happening.

"I don't know if I was frightened or if I wasn't able to have a coherent set of thoughts," he says.

Weeks estimates he's been to more than a dozen protests in the past year, moved to act by ongoing examples of racial inequality and injustice in St. Louis and across the country. On Wednesday, protesters in Ferguson had gathered in front of the police station in solidarity with nationwide demonstrations following the fatal police shooting of Alton Sterling in Baton Rouge, Louisiana.

As a white person, Weeks says feels a responsibility to criticize and try to change a system skewed unfairly to benefit people that look like him while black people are arrested, jailed and killed at alarming rates.

"I'm a normal person, who just said, 'This is not tolerable,'" Weeks says.

Witnesses say police and paramedics refused to help after the driver hit Weeks, leaving two friends to drive him to the hospital. A city spokesman didn't return a request for comment on Thursday evening, but a Ferguson police officer rejected protesters' account, questioning whether there had been a hit-and-run at all.

Online on Thursday, activists were demanding police video in hopes of identifying the driver. There were also more protests in Ferguson late Thursday with reports of at least two arrests.

St. Louis city Alderwoman Megan Ellyia Green, who knows Weeks, began seeing reports about the collision on Wednesday night through social media and was relieved to learn from his wife the injuries weren't more serious. She described him as a "soft-spoken" and "well-mannered" advocate for social justice and racial equality.

"It pains me to know that this kind of thing happens," she told the RFT.


Video Advertising
Weeks says he has a headache, a bump on his head and scrapes across his back. But he says he won't think twice about attending another protest.

"What happened to me, I was simply bumped," he says. "What happens all across the country is far more atrocious."

Editor's note: A previous version of this story provided incorrect information about the location of Alton Sterling's shooting at the hands of police officers. He was killed in Louisiana, not Minnesota. We regret the error.