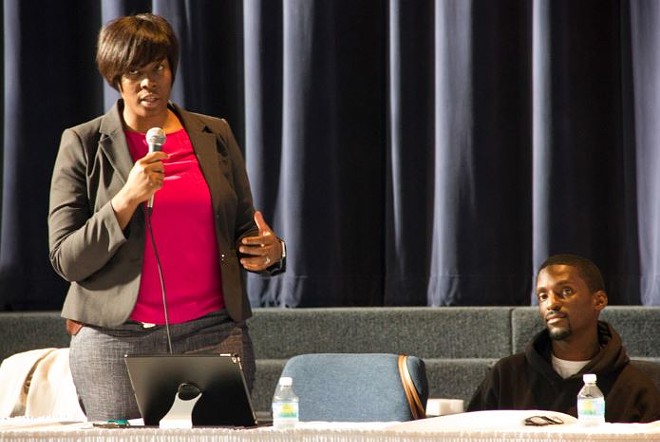 "We hope he resigns or is fired," says Sgt. Heather Taylor, the president of the Ethical Society of Police. The organization of black cops counts 215 members, which is about 20 percent of the force. "We can't recover. It's not going to get better."

Previously, in November, the Ethical Society of Police announced Dotson had lost its members' confidence as a leader. And now, in an exhaustively detailed new report, the group accuses the chief of implementing unfair disciplinary procedures, stocking the top ranks with white officers and assigning priority resources to downtown areas while allowing north city neighborhoods to wither.

Released yesterday, the 112-page report presents Dotson's department as bisected by a racial barrier between the lower and higher ranks — a divide that black cops have lived with for too long, says Taylor.

"I feel that a lot of political pressure are behind a lot of [Dotson's] decisions, and he's trying to appease everyone. He just has to do what's right," she says.

Dotson says he isn't going anywhere. He rejects claims that his department has deployed resources unequally. He also notes that the department's hiring and promotions are governed by the same civil service procedures followed by all city agencies.

At a Thursday night forum held at the New Northside Conference Center, Taylor was joined by leaders of the Firefighters Institute for Racial Equality, which represents black firefighters — a group that's currently suing the city over hiring and promotion procedures.

Both groups plan on holding more forums in the future.

"This alliance is needed," Capt. Abram Pruitt, president of the Firefighters Institute for Racial Equality, told the forum audience. He called on the city's black communities to support the black cops and firefighters.

Read the full report from the Ethical Society of Police:

ESOP: Final Comprehensive Evaluation of the St Louis by Danny Wicentowski on Scribd