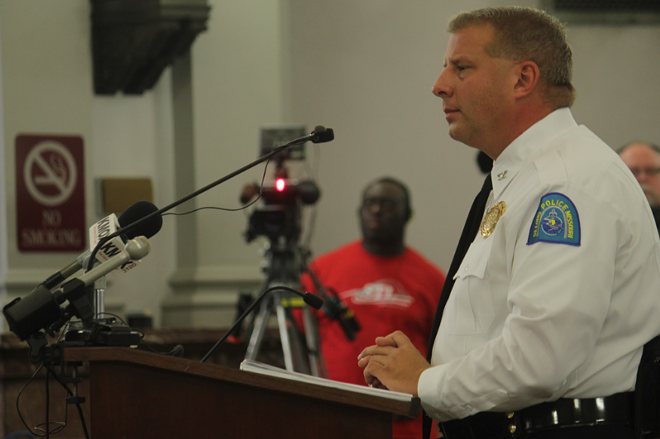 St. Louis Metropolitan Police Chief Sam Dotson has his hands full. In just the past week, the city was shaken by a spate of horrific crimes that included two separate shootings that killed a young mother and toddler. Several aldermen have called for his resignation.

But while Dotson has gone on the offensive to defend himself and his department, he sure didn't do himself any favors Thursday when he Tweet-bragged about how the SLMPD's new mobile app notched its first arrest — for panhandling.

Seeing great results from SLMPD Mobile! First official arrest as a result of our app made yesterday after an anonymous tip for panhandling.


Update, 12 pm: In an interview, Dotson filled us in on the details of the panhandling arrest. In fact, it turns out the arrest wasn't for panhandling, but for trespassing.

According to an incident report, an employee at a Mobile gas station located in the 700 block of Kingshighway used the app to report a 28-year-old black man who was soliciting customers.

"Upon arrival, an employee at the business stated that the suspect had been on the parking lot several times throughout the day asking customers for money and was asked numerous times to leave, to which he refused," Dotson said. The employee apparently selected the "panhandling" option from the app's drop-down menu. The police ultimately arrested the man for trespassing.

"I think people in their minds have created a scenario that’s not true in this case," Dotson added, responding to criticism that his department is using the app to target homeless people who use panhandling to stay alive.

"People think is that this is just a guy who is homeless and standing on a street corner and we arrested him for being homeless or asking for money. This guy was arrested for trespassing on private property and the business will have to decide whether to prosecute or not."

End of update. Our original story continues below.

Launched Sunday, the SLMPD app allows users to submit crime tips and photos to police officers, with the option of doing so anonymously.

Dotson's response to the app's first arrest, however, was interpreted as callous and thick-headed by many on social media, who proceeded to savage the Tweet's replies into a radioactive wasteland.

@ChiefSLMPD FANTASTIC. Maybe you can get that huge non-clearance on homicides down with a few more panhandling arrests!

@ChiefSLMPD Shame on you! Maybe they are unemployed or mentally ill and needed some compassion. In stead of offering help you offered jail.

@Primit1v3 @AnonCopWatch @ChiefSLMPD hell yes! Finally an app to find the homeless to arrest, so hard for the cops to find otherwise

@ChiefSLMPD this app should be used to Anonymously report fascist police that harass our homeless neighbors.

Uber, but for having desperate human beings locked in cages because they slightly inconvenienced you for a second. pic.twitter.com/JCdj9SJxfE

The St. Louis Post Dispatch reports that St. Louis paid $35,000 for the app's development. On Sunday, Dotson said it was "money well spent."