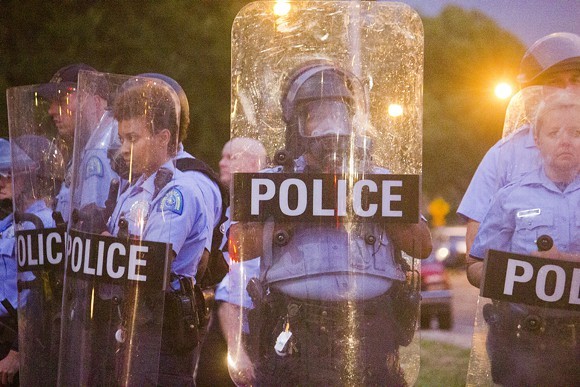 Around noon on August 19, 2015, police say Mansur Ball-Bey pointed a gun at the two officers, Kyle Chandler and Ronald Vaughan, who were executing a search warrant on a house near Page Boulevard and Walton Avenue in Fountain Park. Both Chandler and Vaughan fired at Ball-Bey as he ran, but it was Chandler's shot, which struck Ball-Bey in the back, which proved fatal. An autopsy showed that the bullet ultimately punctured the eighteen-year-old's heart.

“This is a tragedy in every aspect of the word,” Circuit Attorney Jennifer Joyce said in a press release. A 43-page report from her office, released publicly today, concluded that "there is insufficient evidence to prove beyond a reasonable doubt that the two officers didn’t shoot in self-defense, as they contend."

Ball-Bey's death was followed that same night by extensive protests and heavy police response. During the chaos, a car and several buildings were lit on fire.

“One of the biggest challenges we face in this case is that there is no independent, credible witness we can put in front of a grand jury or regular jury who contradicts police statements,” said Joyce. “None of the other witnesses had a clear view at the moment when Ball-Bey was shot.”

In a statement, St. Louis Metropolitan Police Chief Sam Dotson said he was appreciative of the community for its patience while the police and Circuit Attorney's office conducted their investigations. He said his department will now conduct an after-action review of the shooting, which is standard procedure for the department's Force Investigative Unit.

As for the two officers involved in the shooting, they were interviewed by police but refused to talk to prosecutors. Their lawyer, Brian Millikan, told the St. Louis Post-Dispatch, "We're relieved the inquiry is over. And it's the result we expected."

A summary of the Circuit Attorney's findings can be found here. The full report is here.