Study Calling Out SEMO for Offensive Tweets Gets Deleted (UPDATE) 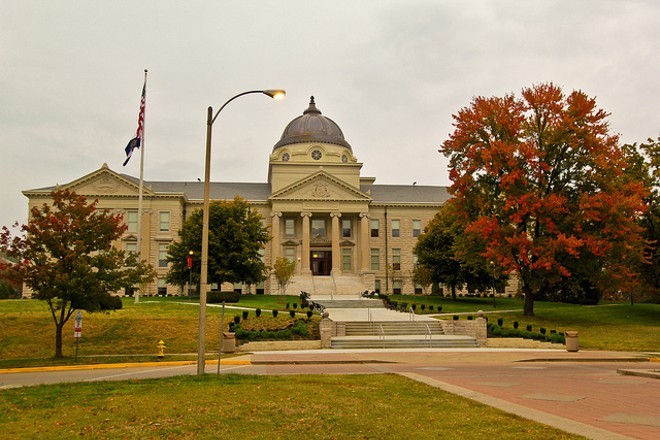 Update: We updated this post at 2 p.m. to include a statement from SEMO. The university, which did not respond to our original requests for comment, has apparently been seeking to talk to College Stats, with no luck — but College Stats has recently deleted the study from its website.

A Missouri university has been named one of the most racist, homophobic and all around offensive colleges in the nation when it comes to Twitter.

Cape Girardeau’s Southeast Missouri State University, better known as SEMO, topped a list of 1,537 institutions of higher learning by accumulating the most derogatory tweets on or near campus. According to data gathered by the online site College Stats, for every 1,000 words tweeted, near SEMO, nearly three were racial slurs, politically incorrect views, sexism or homophobia.

SEMO also topped the list of universities with the most derogatory language towards women (including the word “bitch.”) For every 1,000 words, roughly two of them were derogatory towards women.  When the word "bitch" was taken out of the same equation, SEMO didn’t even place in the top 10, College Stats noted. In other words, a lot of people on or near the SEMO campus like to tweet the word "bitch."

A quick search of Twitter found plenty of examples:

#Survivor Rodney your on point
Guys most guys will fuck anything. It's the girls responsibilty to not be a whore #realtalk I like u Rodney

Need a girl who wants to be fucked like a slut but treated like a princess! #GetAtMe

this the shit i be scared of at SEMO. southeast missouri & racism is too real..

One student even posted on Twitter a recent screengrab from the campus' YikYak, a location-based app that lets college students share their thoughts anonymously. 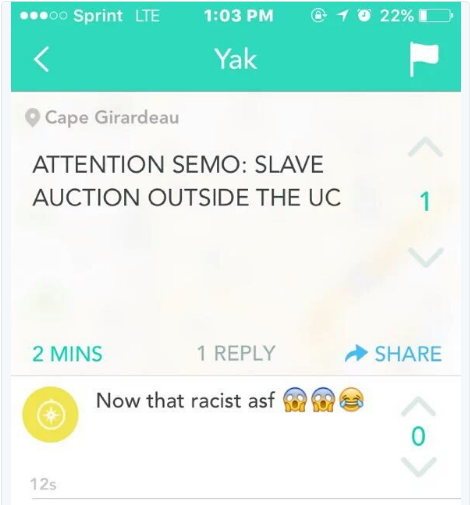 College Stats used a database of over 11 million tweets and selected 1,537 universities with a total of 2.4 million tweets for analysis. The tweets must have originated within one mile of the campus.

“The answer is, and always will be, education. It seems that colleges and universities across the country still need to crack down and speak up. Perhaps they need to denounce the negative Twitter posts as soon as they see them,” the collegeorg’s report read.

Don't count on it. SEMO did not reply to several requests for comment this week.

Check out the full report here. 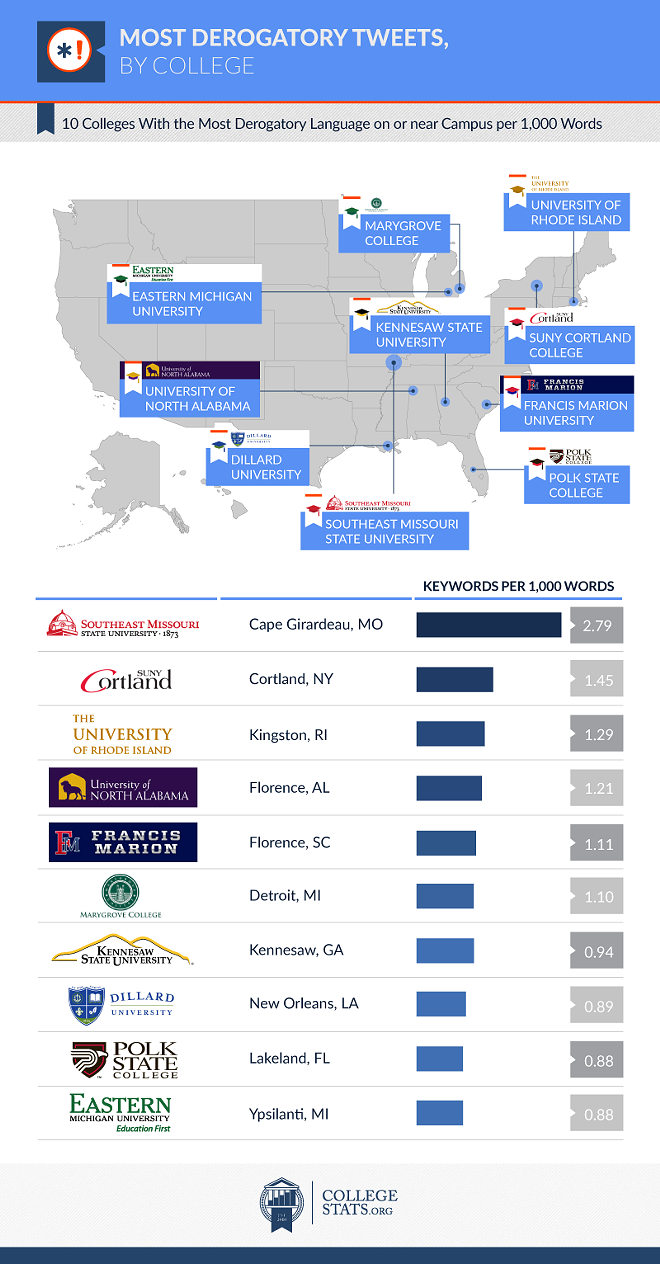 SEMO's news bureau director reached out this afternoon to let us know the university has some problems with the College Stats ranking — and that, in fact, College Stats has since removed the ranking from its website. Sure enough, the link now redirects elsewhere.

She provided us this statement from University President Carlos Vargas:

Southeast Missouri State University has recently been named by collegestats.org in a study analyzing derogatory and racist language used in Tweets. The University has made numerous attempts to contact those involved in conducting this study at collegestats.org to no avail. A listed phone number rings numerous times with no answer, while the address for the organization is listed as a post office box. Our research has failed to find a valid social media or physical presence, thus making it impossible to contact the company to validate the findings.

The study purportedly reviewed Tweets within a three-mile radius of the campus, which in the case of Southeast Missouri State University would cover the entire city of Cape Girardeau. While the population of Cape Girardeau is 38,000, it is a medical and retail hub with more than 100,000 visitors to the community daily. The Tweets referred to in the study could be attributed to anyone visiting the community as opposed to specifically the students enrolled on the campus of Southeast Missouri State University.

While no place in society is immune to derogatory speech, we take intolerance, racism and sexism very seriously on our campus. Hate speech and bigotry are in no way tolerated at Southeast Missouri State University. Southeast has made enormous strides in the past in strengthening diversity education on the campus and bolstering a diverse, respectful, and welcoming campus climate with a number of diversity initiatives.

We, along with other higher education institutions listed in this report, believe that collegestats.org and its work are suspect, considering the methodology used to determine the validity of the findings have not been made available to us. We are continuing to work with several of the other higher education institutions listed in the report and with our legal counsel to correct the misleading information that collegestats.org is perpetuating.

College Stats originally took the study down without comment, but since that time, a statement has appeared on its website.

Go figure, they're blaming the media:


The recent study on the tweeting of derogatory words on or near college campuses has been removed from our website because some have misinterpreted the data presented.

All that the study intended to show—and all that the article stated—was that certain derogatory words are more prevalently tweeted on or near certain campuses. The number of times each selected keyword was tweeted is accurately calculated. As was made clear in the article, the study did not take into account the context of such tweets. Even careless, albeit not mean-spirited, use of these terms has an impact on our society and perpetuates the further use of these derogatory words.

The study could have spurred thoughtful discussion of the impact of derogatory language on society. By highlighting the derogatory words tweeted, the affected colleges and universities had an opportunity to address, denounce, and educate. But the findings were misconstrued and sensationalized beyond recognition, undermining the potential useful purpose of the study.