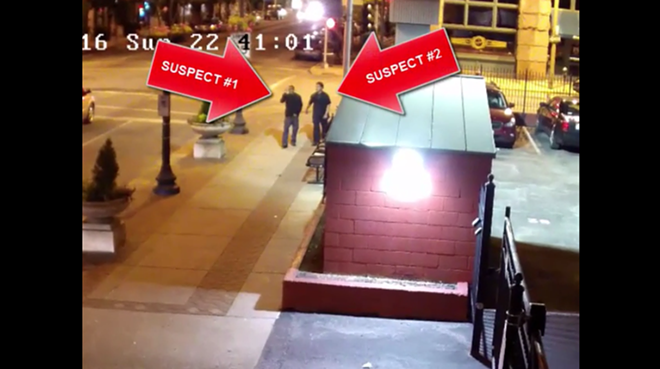 The suspects in a cold-blooded killing and kidnapping were caught on video moments before they murdered a young mother in front of her baby and friend, authorities say.

City police released surveillance footage that shows the two men about 10:30 p.m. on Sunday walking casually along Washington Avenue. Brandi Hill, 21, of O'Fallon, was behind the wheel of a red 2015 Dodge Charger at the time, stopped in the eastbound lane between 11th Street and Tucker Boulevard. Her friend was in the passenger’s seat, and Hill’s nine-month-old daughter was in a car seat when the men rushed the car, police say.

One of the men yanked open the passenger door, demanded the keys and dragged Hill’s friend into the street. The other jumped into the car and immediately shot Hill, authorities say. The gunman climbed into the driver’s seat.

In a clip of the video, the Charger zips east to 11th Street while the second suspect sprints along behind. The driver hits the brakes, and the man on foot starts to climb in through the open passenger window as the clip ends.

Police say that’s also where the driver pushed Hill, mortally wounded, into the street and left her for dead.

Hill’s baby was still in the back of the Charger when the carjackers drove off. They eventually “threw” the little girl, still in her car seat, into the street about three miles away, police say. People in the neighborhood found the child unharmed near the intersection of Angelic and 22nd streets.

Hill was taken to a hospital where she was pronounced dead. The baby was handed over to a family member. The condition of the friend was unknown.

Police are still hunting the killers and ask anyone with information to call CrimeStoppers at 866-371-TIPS.