Tropical Liqueurs Readies for a New, Bigger Space in the Grove (UPDATE) 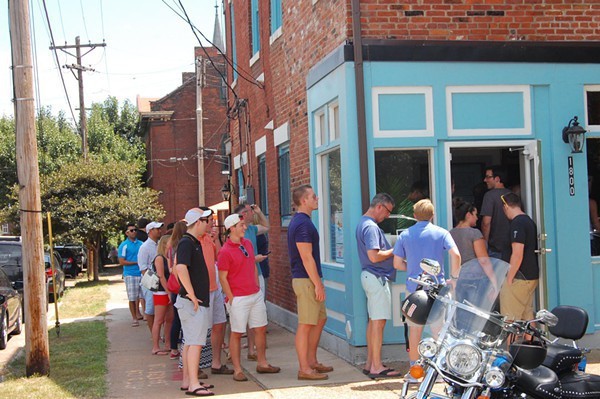 Tropical Liqueurs announced today that it would be moving to 4104 Manchester Road in the city's Grove neighborhood. It hopes to have its licensing and permitting complete by August 1.

The 8,000-square-foot space is nearly double the bar's current home in Soulard, and includes a courtyard.

“We are planning to make extensive improvements to the building, which is going to take some time, but we are looking forward to the new location,” co-owner Billy Thompson said in a press release.“The Grove really embraces the diversity of our city, and we’re excited to be a part of the neighborhood. The neighbors we have met with have been very welcoming."

Here's to a happy ending for everyone.

Tropical Liqueurs, which is moving out of Soulard after losing a battle with the neighborhood over its liquor license, has found a new home — in the city's the Grove neighborhood.

That's according to co-owner Billy Thompson, who says a deal is nearly finalized.

“We are getting extraordinarily close and are very excited. Our new location will be even bigger than the last,” Thompson says. Of the new neighborhood, he says, “I think it really fits the bar’s concept itself.”

The move comes after the slushie bar's liquor license was revoked by a city hearing officer in March, followed by St. Louis City Circuit Court Judge Joan Moriarty granting the bar a stay in early April.

The Soulard location had angered some neighbors, who blamed the bar for drawing trash, crowds and even armed patrons. (At the city hearing over its license, Trops owners suggested racism might be fueling its critics, as the bar drew a black clientele to a largely white neighborhood.)

In the mean time, the bar and its neighbors have existed in an uneasy truce. Soulard resident Billy Tomber says that, while some of the problems have subsided in recent months, he’ll be happy to see Trops move away from his neighborhood as it gets warmer.

“I would wish them well in another location,” Tomber says. “The location was 90 percent of the problem to begin with. It’s a dead-end street and it’s too small for the size of crowd they were attracting.”

Thompson says he believes the Grove will better suit the volume of customers Trops brings to its St. Louis location.

“We never really had any actual issue, it was just volume. The Grove already has volume there,” Thompson says.

Of the Soulard location, he says, “In our opinion, everything had already been running as it should, and we continue to have no problems.”

In April, after Judge Moriarty granted the stay, a press release noted that the owners would be looking for a new location that would be “eager to have Trops.”

In the same press release, it was noted that “the purpose of the order is to maintain the status quo, and requires that the owners continue their voluntary efforts to work with neighbors, including closing at midnight, not allowing to-go cocktails and keeping current additional security in place.”

While Tomber says that many aspects of Trops have improved, he’s seen people carrying out beverages in recent months.

Editor's note: A previous version of this story contained incorrect information about the timing of Trops' move to the Grove. The bar hopes to have permitting complete by August 1; it does not yet have date for its reopening. We regret the error.