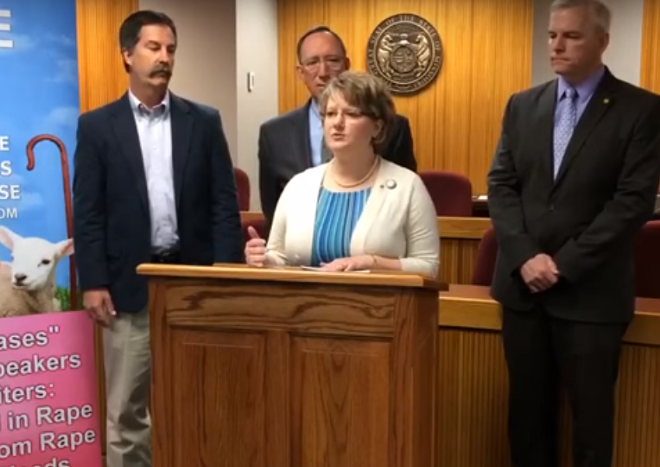 Should a fetus be given the constitutional rights of a person?

That's the question some Missouri Republicans want to put to voters come November. But in the process, they've drawn national scorn for one lawmaker's comparison of abortion to slavery and the Holocaust — and, even more embarrassingly, another lawmaker's suggestion that a pregnancy conceived from rape is a "silver lining" from God.

The latter comments came from Rep. Tila Hubrecht (R-Dexter). During an intense Tuesday floor debate on the measure, Hubrecht made the case that women should not be allowed to abort pregnancies caused by rape.  "When God gives life he does so because there's a reason, no matter what," she said. "Sometimes bad things happen, horrible things, but sometimes God can give us a silver lining through the birth of a child." Because, yeah, rape sucks, but there's nothing like nine months of living with your rapist's baby growing inside you to help you get over it!

Granted, unlike the infamous 2012 statements from Todd "the female body has ways to try to shut that whole thing down" Akin, Hubrecht at least acknowledged that rape could produce a pregnancy.

That didn't stop Democratic lawmakers from lashing back at her words.

“Do you believe that it’s just or compassionate to force a woman who’s been raped to have the child of the man who raped her?” said Rep. Lauren Arthur (D-Kansas City), the St. Louis Post-Dispatch reported.

Hubrecht's comment about a silver lining was later reported by Raw Story, Mic and other liberal blogs. In response, Hubrecht held a press conference Thursday to defend herself and clarify her beliefs.


The bill that inspired all these dopey comments, HJR 98, would present voters with this question on the November 2016 ballot: "Should the Missouri Constitution be amended to protect pregnant women and unborn children by recognizing that an unborn child is a person with a right to life which cannot be deprived by state or private action without due process and equal protection of law?"

In a press release, the bill's sponsor, Mike Moon (R-Ash Grove) invoked the Holocaust to get his point across.

“The silence of those who want to protect the unborn is similar to the silence of Germans who stood by and allowed Jewish people to be slaughtered by the Nazis,” Moon said, reported the The Kansas City Star.   On Thursday, the bill was successfully passed by a House vote of 110-37. The legislation will now move to the Senate.

But with less than two weeks left in Missouri's legislative session, it's hard to see this bill moving very far in the Senate. That's a good thing, say opponents. Voters in North Dakota rejected a similar measure in 2014, while in 2012 the Oklahoma Supreme Court in 2012 ruled that granting "personhood" to embryos would be equivalent to banning abortion.

As we've noted previously, applying constitutional protections to fetuses could create far-ranging consequences for women seeking morning-after pills and IUDs, since these methods can prevent an already-fertilized egg from implanting in the uterus.

On Tuesday, Sarah Rossi, Policy Director for ACLU Missouri, tweeted that the bill "is the most extreme of ALL extreme anti-women bills this year. [I'm] shocked it's being debated. And that's saying something."