Barred from Their St. Louis School Because They're Black, a Family Files Suit 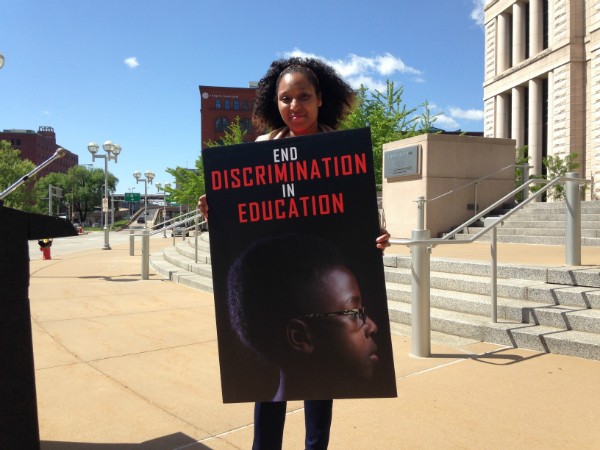 A St. Louis mom is going to court to fight desegregation rules that would bar her son from his chosen school next year — just because he’s black.

La'Shieka White says she was stunned when she found out her nine-year-old son, Edmund Lee Jr., would have to switch districts next year due to his skin color.

“It’s like being caught in a time warp,” White says. “I couldn’t believe what I heard.”

White, who is now being represented by the nonprofit Pacific Legal Foundation, filed a federal lawsuit this morning in St. Louis, arguing the long-running practice is unconstitutional.

The fight stems from a 33-year-old set of rules created as a “system-wide remedy” for the metro’s habit of clumping black students in weak city schools, while white kids filled stronger suburban districts in the county. School leaders agreed in 1980 to fix the problem as part of a settlement of a discrimination lawsuit filed in 1972. A federal appeals court in 1983 signed off on a plan that allowed black students in the city to transfer to better schools in the county. The agreement also allowed non-African American students to enroll in city magnet schools.

The policy makers may have meant well, but White says it has disastrous consequences for Edmund, a third-grader at Gateway Science Academy. Their family of five recently moved from a small apartment in the city's Grove neighborhood to suburban Maryland Heights. White says her car had been broken into multiple times outside their old apartment, the sound of gunfire was common and cars regularly raced through the streets, blowing past stop signs.

She and her husband wanted a safer, larger place for Edmund and his two young siblings. But the rules that give black students access to county don’t work in the opposite direction. Only non-black students in the county can transfer into city magnet schools. That means Edmund could be forced to leave a school he’s attended since kindergarten — even though the rules would allow one of his suburban, white neighbors in the county to take his place.

An online petition dedicated to the fight has more than 130,000 signatures.

They also fall short of the racially diverse goal, Thompson says. Despite its aim to help integration, more than 80 percent of Gateway’s students are white.

The problem lies with the Voluntary Interdistrict Choice Corporation, Thompson says. The nonprofit was created in 1999 to assume control of the transfer program, which had previously been under the watch of the district court. The corporation, run by a coalition of superintendents in the participating districts, renewed the program in 2007 and again in 2012. It’s projected to enroll students through the 2018-2019 school year.

Thompson says the corporation was under no obligation to renew the program and is solely responsible for its policies governing race-based transfers. The corporation is the only defendant named in the suit.

The Riverfront Times has reached out to the corporation for comment. We'll update this post if we hear back.

In general students must attend school in the district in which they reside.  In VICC’s case, we are governed by the Federal court decision and the related Settlement Agreement which was established to address long standing school segregation issues.  As such the Agreement (which was signed by many parties including the State of MO) allows for African American students residing in the City of St. Louis to attend certain participating districts in the county and conversely to allow non-African American students in participating districts in the County to attend magnet (and Charter) schools in the City with one of the primary goals being to increase the integration of the schools. This particular student’s ineligibility is a straightforward application of how the program works and the rules that we must abide by.

We cannot comment specifically on the lawsuit because we have not had time to study it.

The following statement was issued by DESE on February 26, 2016:

The Missouri Department of Elementary and Secondary Education (DESE) would like to clarify the situation involving an African American Gateway Science Academy student denied transfer from St. Louis County to the Gateway charter school. This unfortunate situation is not due to state law or state regulations. It is a result of the student's change in residency from St. Louis City to a school district in St. Louis County.

Even if the family's new St. Louis County school district participated in the transfer program, the student would still not be able to transfer. This situation stems from the 1980 U.S. Court of Appeals ruling that the St. Louis City and County schools were maintaining segregated systems. In 1983, the schools reached a Desegregation Settlement Agreement allowing African American students to transfer into primarily white suburban school districts and for non-African American students to attend St. Louis schools. The goal was to try to balance the racial makeup of the city and county schools.

There are no state laws or DESE regulations specifically preventing African American students from transferring schools.