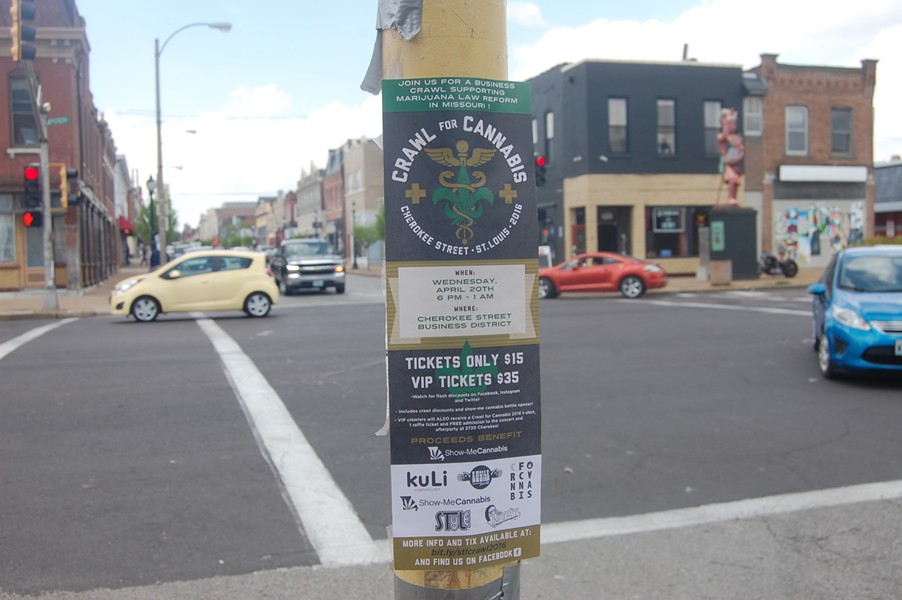 If you believe pot should be legalized, you’ll want to get ready for Wednesday. St. Louis’ second annual Crawl for Cannabis will make its way through Cherokee Street tomorrow, April 20, with the march followed by an outdoor concert.

The check-in for the parade starts at 6 p.m. at Mr. Nice Guy (2636 Cherokee Street) and the concert starts at 9 p.m. in front of 2720 Cherokee. Local bars, restaurants, and retail shops on Cherokee, including Whiskey Ring, the Fortune Teller Bar, I Scream Cakes, Mr. Nice Guy and Melt, will be offering specials for customers from 6 p.m. to 1 a.m.

Brennan England, a Show-Me Cannabis representative and licensed massage therapist, is helping to organize the event. He says he’s personally been affected by pot’s illegality. The lives of his family and friends have been placed in turmoil as they’ve sought medical marijuana.

“I have massage clients in confidence who have shared with me that some of them were addicted to opiates. There are children who are experiencing eighteen seizures everyday but with the help of cannabis have been limited to none… Some people who suffer from glaucoma aren’t able to leave the house and have to settle for whatever cannabis they can come across on the street. The legalization will help patients be safely medicated.”

And Missouri’s minority residents have disproportionately suffered from pot’s illegality. England, who is black, knows that all too well. On traffic stops, immediately after asking who his vehicle is registered to, police ask him if he has drugs in his car. Studies show that blacks are 2.6 times more likely to be arrested for marijuana possession in Missouri than whites.

“Crawl for Cannabis” is being sponsored by New Approach Missouri, the group pushing to legalize pot in Missouri.

The group hopes to establish a statewide medical marijuana program through an initiative on the November ballot. (The initiative is still in need of signatures, so visit its website to sign up or donate.) The initiative would offer medication for patients suffering from illnesses such as cancer, epilepsy, PTSD, and other illnesses. Access to medication would allow for patients to purchase up to six ounces of marijuana for 30-day period from dispensaries. Under the initiative, patients would be permitted to grow up to six plants at home. The initiative has provision that levy a four percent tax on retail sales that goes to newly established Missouri Veteran’s Care Fund, which would benefit drug rehabilitation services, housing assistance, and other non-profits.

Missouri’s non-progressive laws help brand and criminalize Missourians every year for cannabis possession. In 2012, Missouri reported roughly 18,800 arrest or citations for marijuana-related offenses, according to the American Civil Liberties Union of Missouri. The ACLU of Missouri notes that Missouri is home to one of the counties with the highest concentrations of arrests for marijuana possession in the country –- Cole County, Missouri.