Big New Projects in Shaw Could "Finish" the Neighborhood 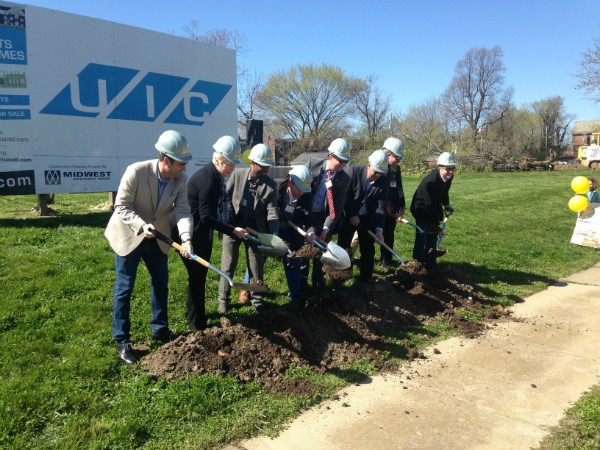 The transition of the northern edge of the Shaw neighborhood from a pocket of drug violence to one of St. Louis' hottest neighborhoods is nearly complete.

Meanwhile, design-build firm UIC recently broke ground around the corner on a major housing development planned for a grassy expanse across DeTonty Street from Interstate 44.

A few blocks away, two finalists are vying to transform the former Shaw Theatre into either a wedding venue or a year-round market with artisan and food vendors.

And two longtime Shaw residents, Bill and Maureen McCuen, have closed on another former filling station, this one at the corner of Russell Boulevard and Thurman Avenue, where they plan to make their home and build a commercial structure to lease as a cafe.

His agency – a nonprofit that works to develop the neighborhoods of Shaw, Southwest Garden and Tower Grove South – is one of a constellation of community organizations that have transformed Shaw. Posters hung throughout the development corporation's Shenandoah Avenue office are filled with before-and-after shots of formerly boarded-up houses reborn as single-family homes. Spencer says they started with a list of 60 to 70 vacant buildings about five years ago and are down to just fifteen. 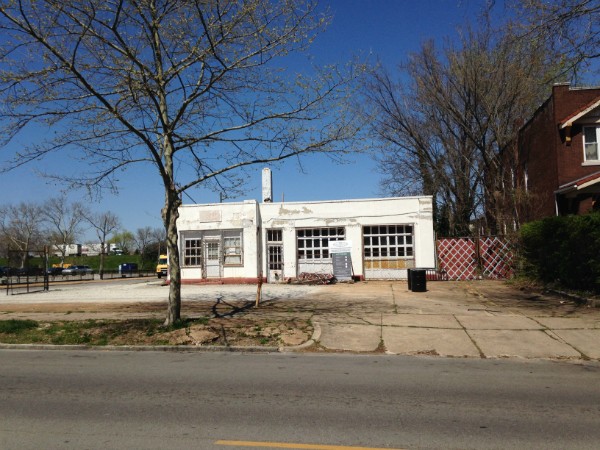 “We've removed a lot of blight in the neighborhood, and I think that's a key to stabilizing and revitalizing a neighborhood,” Spencer says.

The DeTonty site has been one of the most stubborn. In the 1970s, it was filled with brick houses and bustling with people. Martinous Walls, 45, and his family moved onto the block in 1976 and watched the neighborhood literally crumble around them. A cousin, involved in the drug trade, was killed on the corner of Thurman and DeTonty. Another was murdered nearby, and Walls counts a handful of friends among the neighborhood's dead.

He blames it on gangs and drugs. Neighbors moved to the suburbs. Houses were abandoned. Former homes became arson-prone crime magnets. When three-quarters of the block was eventually bulldozed and returned to grass, it was almost a relief. At least it was quieter, says Walls, who grew up to be a city cop and one of the department's homicide supervisors.

His family's home is one of just six on the block that are still standing, but that's set to change. UIC invited business partners and community members to an April 2 groundbreaking on DeTonty, where the firm plans to build 64 one- and two-bedroom apartments along with eight townhouses by the fall.

Walls can't wait for work to begin. He thinks Shaw, with its mix of races and incomes, could serve as a model for the city.

Emmett Coleman III, president of Shaw Neighborhood Improvement Association, agrees but says it will take work. As Shaw grows in popularity, house buying has become more competitive and expensive, with some listings topping $400,000.

“Progress is always good,” Coleman says. “We just have to be conscious of the effects of it.”

UIC had originally planned to fill the DeTonty site entirely with town homes but reconfigured when the first few potential buyers couldn't be persuaded to make the leap needed to get the project started. The new rental-heavy design has proved much more popular, and Crittenden says they've already had interest in the town homes to be built on either side of the apartments.

“We're excited to play a role in filling this last gap,” he says of DeTonty.

Alderman Stephen Conway has worked on most of these projects for more than two decades, through his roles on housing commissions, development agencies and city government.

“You can't just jump up and down and say, 'Make it happen,'” Conway says. “It takes coordination.”

One of the keys is planning in advance, so that when grant makers start looking for “shovel-ready” projects, the neighborhood can be first in line, he says. That's helped rebuild Shaw's infrastructure, cleaned up contaminated sites and made it safer.

Even with the help, some sites have remained tough to develop. The former Shaw Theatre, most recently home to Salamah's Market, is chopped up and rough inside. Boards cover the windows. The sheer size of the building and amount of work needed make it a major project. But two finalists are now hoping to take it on.

A local entrepreneur has proposed a gut rehab of the 7,000-square-foot interior to open it back up as Shaw Public Market, an all-seasons artists bazaar with food vendors and a cafe.
The plan is competing against the owners of a wedding videography business, Burlap, who hope to transform the sprawling building as a wedding and special events venue called Wild Carrot. The owners, Laura and Casey Bunch, would live in an apartment upstairs. They'd also like to buy neighboring lots to create outdoor space, including a garden. UIC has signed on to do the renovation work.

Conway has spent about twenty years trying to make something happen at the old theater. Another of his longtime targets is a former gas station at Russell and Thurman. It's been closed for nearly all of his life, he says. Cleanup workers had to dig out buried fuel tanks and remove the surrounding soil.

“They needed an extension ladder to get to the bottom of the hole,” he says.

Architect Bill McCuen, who moved twelve years ago to Shaw, had often thought the old station would make a cool home. His wife, Maureen, has lived almost her entire life in the neighborhood, and they eventually decided to sell their house on Flora Place to renovate the corner station and build a commercial  building for a coffee shop.

It turned out to be more of a project than they expected – the discovery of hydraulic jacks required additional environmental cleanup and a delay of about nine months – but they finally closed on the property two weeks ago. They weren't able to buy a neighboring building that they had hoped would be the cafe, but they have settled on building a new structure at the corner. The coffee shop will be called Fiddlehead Fern Cafe and already has a tenant, McCuen says. He and his wife will live in the first floor of the gas station with space for another residence or office above. 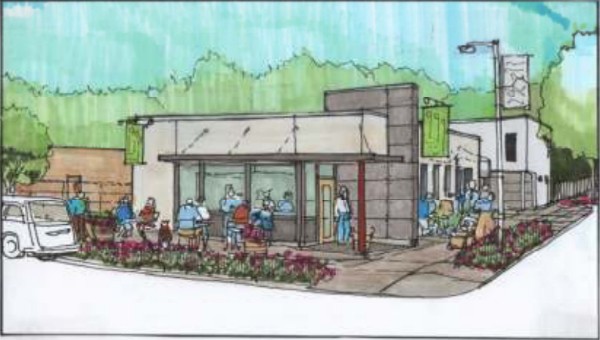 “I've had opportunities to live in other countries, but I like this wacky city, and I like this corner,” McCuen says. “I think it's the confluence of some tremendous energy, and I think we will all benefit. I think it will be fun.”

Another gas station, at Klemm and Shaw, has similarly existed as an eyesore for decades. The development corporation run by Spencer bought it at a tax sale in August 2013 and has undertaken a $160,000 grant-funded environmental cleanup.

Restaurateur Bailey was one of four applicants who answered the agency's request for proposals. His concept for a small-scale version of his popular Baileys' Range restaurant (920 Olive Street) won over the committee.

Spencer says Bailey was an "obvious choice," although in previous interviews with the RFT he cautioned there were “significant” issues – including final approval of the cleanup – before a deal could be reached.

Still, he's excited to see years of work in the neighborhood paying off.

“I wish I could bring the shovel out and start moving the dirt myself,” he jokes.

Editor's note: This story has been updated to correct out-dated information about one of the proposals for the former Shaw Theatre.