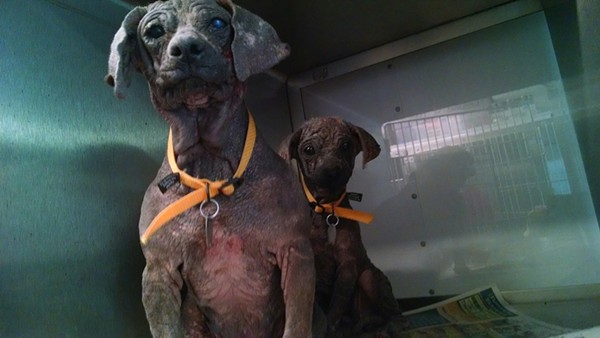 Hairless and riddled with parasites, more than two dozen mixed-breed dogs roamed the grounds of a southwest Missouri home located near the border of Lawrence and Newton counties. According the Humane Society of Missouri, which transported the animals to St. Louis for treatment, they suffer from eye, ear and respiratory infections.

On Thursday, the Humane Society of Missouri's Animal Cruelty Task Force announced that it had rescued the 28 dogs from a pet-hoarding owner who kept them in "a waste-filled, trash-and debris-strewn property and in an abandoned, dilapidated house trailer."

Following a tip, the task force contacted the owner and the two parties eventually agreed that the dogs would be surrendered to the task force. But that doesn't mean the owner will be able walk away from the damage inflicted on these innocent animals. According to a press release, the task force will recommend to the Newton County prosecutor that animal abuse charges be filed against the owner.

“Our experience tells us that, unfortunately, people in this situation will continue to acquire and become unable to care for animals until they are prevented from having more animals," Kathy Warnick, president of the Humane Society of Missouri, said in a statement.

The dogs are expected to arrive this morning at the Humane Society's headquarters in St. Louis, where they will begin the months-long process of treating their skin ailments and regaining their health.

If you want to help these pups, the Humane Society is seeking donations of string cheese or cooked, frozen chicken strips. As for toys, bring gently-used, clean, stuffed cuddle toys or interactive canine toys such as Kongs or Busy Bones. You can drop off items at the adoption center at 1201 Macklind Avenue.

See also: 25 Furry Friends You Need to Meet at the Humane Society of Missouri