A driver spotted Bob’s orange-and-white body beside Route 163 and reported it to authorities. The figure, who looks a little like someone decided to make Slender Man out of road construction barrels, had disappeared on March 19 from U.S. Route 50/63 in Jefferson City. The state Department of Transportation launched a full-on social media campaign calling for the return of the orange aberration, updating his Facebook page with Liam Neeson “Taken” memes and recasting the barrel man as a Where’s Waldo cartoon.

On Friday, the department posted a news release announcing he’d been discovered intact. And no, they specified, this was not an April's Fool joke. 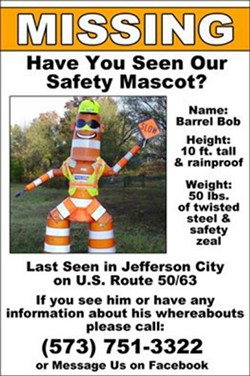 “According to reports from MoDOT workers on the scene, Bob was shaken up but appeared unharmed,” the release says. “To the surprise of no one within MoDOT, he refused treatment and asked to be taken immediately to MoDOT’s Columbia maintenance facility. At the facility, he joked with some of his beloved highway heroes and talked about work zone safety with anyone who would listen.”

Officials haven’t released information about any suspects or theories about about where the towering orange nightmare has spent the past couple of weeks.

Editor's note: A previous version of this story gave the wrong location for the intersection where the orange-barreled mascot was taken. It was Jefferson City. We regret the error.