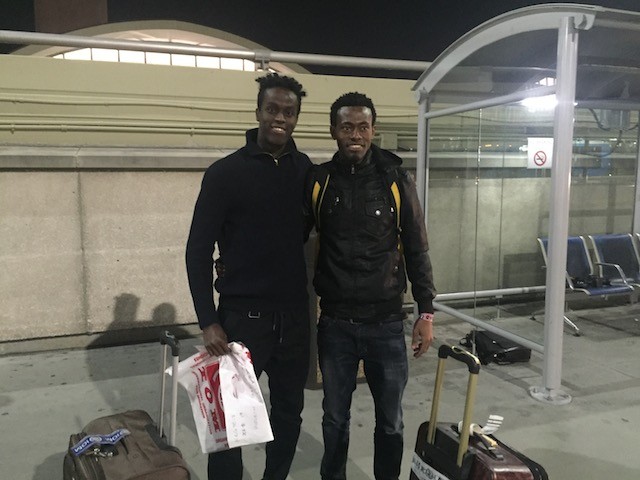 Sports Illustrated yesterday pulled at the heartstrings with a lengthy feature about two members of the Somali national soccer team who recently reunited in the United States.

And for St. Louisans, the story has added resonance: The reunification scene was set at Lambert-St. Louis International Airport. As Sports Illustrated reported, one of the players, Saadiq Muhammad, has been living here for the past eleven months. Last week, the second, Sa'ad Hussein, joined him.

The two had been the best players on the Somali team, and Saadiq is currently taking community college courses and waiting for a ruling from the NCAA in hopes of accepting a full scholarship to Saint Louis University. Sa'ad also hopes to play soccer in the U.S.

But as Sports Illustrated tells it, the men's journey is less a story about the ambitions of top athletes and more about two refugees using their athletic abilities to escape a war-ravaged country mostly forgotten by the outside world these days — with a little help from a documentary filmmaker raised in, yep, St. Louis.

A former journalist who grew up in south county, J.R. Biersmith has made the two athletes the focal point of his upcoming documentary, Men in the Arena.


They were the best players, celebrities in their own right, but they still struggled to send money to their families and faced the constant threat of arbitrary arrest both at home and abroad in East Africa, where Somalis are persecuted because of their country’s terrorist ties and checkered history....

By agreeing to participate in Biersmith’s documentary, “Men In the Arena,” Saadiq and Sa’ad put themselves at risk. The film condemns [terrorist group] Al-Shabaab and includes footage of the men speaking against it. It also includes scenes shot at Mogadishu Stadium, the 35,000-seat venue that has not hosted an international game since before Somalia’s civil war broke out in 1986. ... By depicting soccer there, the film, which is slated for release in 2016, will certainly anger Al-Shabaab, which is weakened but still active in Somalia.

For Biersmith, getting Saadiq and Sa’ad out of East Africa became a priority almost immediately upon meeting them.

At first Biersmith (who is now based in the L.A. area) helped him settle in Miami, and then Dallas. But Saadiq struggled until he moved in with the filmmaker's sister, Jessica Herschend, and her husband in the Central West End last April.

A former prosecutor with the St. Louis Circuit Attorney's Office, Herschend says she first offered to help tutor Saadiq for a few weeks before the ACT. But weeks became nearly two months, and soon she and her husband realized he was meant to stay with them in St. Louis. They helped him enroll at Lift for Life Academy, a charter school based in Soulard.  "They embraced him," she says. 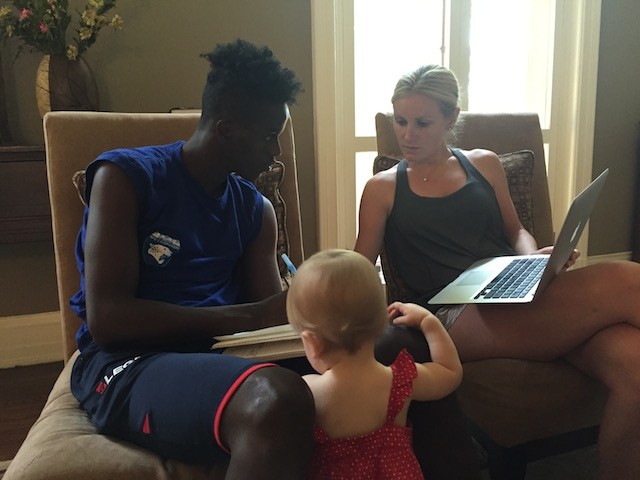 Sa'ad was later able to escape too, and Biersmith was able to help him emigrate as well. Last week, he too resettled in St. Louis — and Herschend is watching, delighted, as Saadiq gives Sa'ad the same crash course in America that she once gave his friend.

"It just warms my heart to see him take the lead and be a great friend," she says. "They are both really, really special boys. Their hearts are huge."

The Sports Illustrated story details the pair reuniting at Lambert and Sa'ad spending his first night in his new apartment in Gravois Park, courtesy of the International Institute (along with "$900 cash to be repaid later, English lessons and a job," according to the SI story).


Sa’ad tells Saadiq that he is so tired, it feels like his eyes are covered in hot sauce. Jama has brought chicken and rice, but no matter how much Sa’ad wants to go to bed, he’d rather go out for a meal. The best option is a nearby Hardees, but it closed at midnight.

Biersmith wonders: Should he just bring Sa’ad back to the Herschends’ home, where Saadiq still lives, for the night? “What food is open?” he asks his phone. “Siri is terrific,” Saadiq exclaims before translating for Sa’ad, who expresses similar wonder. Siri suggests a St. Louis institution, McGurk’s, but an Irish Pub is hardly the proper course, so the group settles on a 24-hour McDonald’s nearby.

Herschend, for one, is confident that Sa'ad will be enveloped in the larger community in the same way Sadiq has been.

"Our friends and family surround Sadiq every day," she says. "When we've been out of town, they help drive him to school. It killed me when I was out of town on his birthday, but our neighbors took him out. It's just been wonderful to see."

She adds, "He had to leave his family behind, and he may never see them again. But we really are his family now. We love him like family." And with Sa'ad here in St. Louis, that family has grown one member bigger.

Watch the documentary's trailer here. And if you're touched by Sa'ad and Saadiq's story, Biersmith says you can help. "Hear their story and let them be understood and respected," he urges.


We welcome tips and feedback. Email the author at sarah.fenske@riverfronttimes.com.

Editor's note: A previous version of this story misstated the timeline of Saadiq's move to the U.S. He first arrived in 2014, and then came to St. Louis in April 2015. We regret the error.