Refugees in St. Louis Recall Horrors as "Butcher of Bosnia" Is Sentenced

The “Butcher of Bosnia,” a man whose brutality still echoes two decades later, was sentenced yesterday to 40 years in prison for genocide and crimes against humanity.

In St. Louis, inside the Bosnian Chamber of Commerce in Bevo Mill, refugees who’d witnessed the evil of Radovan Karadzic’s handiwork listened to a live broadcast played over an iPhone’s tiny speakers as he faced a long-awaited reckoning.

The ex-Serb leader was found guilty of ten of eleven war crimes by a United Nations tribunal at the Hague. Karadzic, 70, is seen as the architect of a bloody campaign of ethnic cleansing aimed at both Muslims and Croats during the Bosnian war. 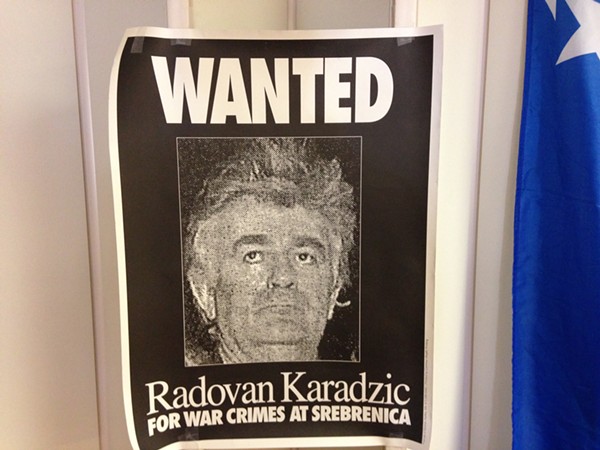 His punishment, a departure from the life sentence prosecutors had requested, was received as an insult by those who were forced from their homes and saw friends and family members slaughtered.

The tribunal acquitted Karadzic of one of two genocide charges, deciding he couldn’t be held responsible for mass expulsions and killings across a string of towns and cities. He was, however, found guilty of genocide for the massacre of 8,000 at Srebrenica.

Hidajet Suljic, the 50-year-old south county owner of granite business, lost his younger brother, Vahdet, in the bloodshed of that town. More than twenty years later, he still doesn’t know what the Serbs did with the body.

Refugees fleeing the war began arriving in St. Louis in the mid 1990s, settling first in Bevo Mill before migrating into other neighborhoods and the county. There are now an estimated 50,000 Bosnians living across the metro area.

Patrick McCarthy, associate dean of libraries at St. Louis University, has worked with the Bosnian community for more than twenty years. He sees the tribunal’s “mixed verdict” as only partial justice.

“We know that the verdict of history has already been rendered in this case,” McCarthy says. “Radovan Karadzic and the people who followed him carried out a systematic destruction of Bosnia-Herzegovina over the course of three and a half years in which mass murder, extermination, systematic rape and the attacks on defenseless civilians showed us that in the aftermath of the second World War and our commitment to say 'never again would genocide be permitted in Europe,' that that was a false promise.”

Dina Strikovic was seven years old when she was detained in one of the camps under Karadzic’s control before she and her family fled to Germany, eventually moving in 2001 to St. Louis. She later returned to study in Germany, earned a master’s degree and spent time in the Hague doing outreach between the tribunal and surrounding communities.

Now back in St. Louis, she says Karadzic's acquittal on one of the genocide charges will be difficult for survivors, who’ve spent decades battling for official recognition of the atrocities in those towns and cities.

“Their trauma didn’t end with the cease fire,” Strikovic says. “Their fight didn’t end when the war ended, when the Dayton Peace Agreement was signed. They were fighting for 21 years to have their history and their pain heard, their history acknowledged and somebody held accountable for what happened to them, and that fight is still ongoing.”

And while the verdict is significant, it’s unlikely to change the lives of survivors who continue to deal with emotional and financial problems as a result of being violently ejected from their homes, said Ben Moore, an associate professor at Fontbonne University who has helped coordinate an oral history project with survivors.

“I think we need to be cognizant of the fact that many people are separated from loved ones,” he said. “Many people have lost loved ones. Many people still don’t know what has happened to their loved ones' remains.”