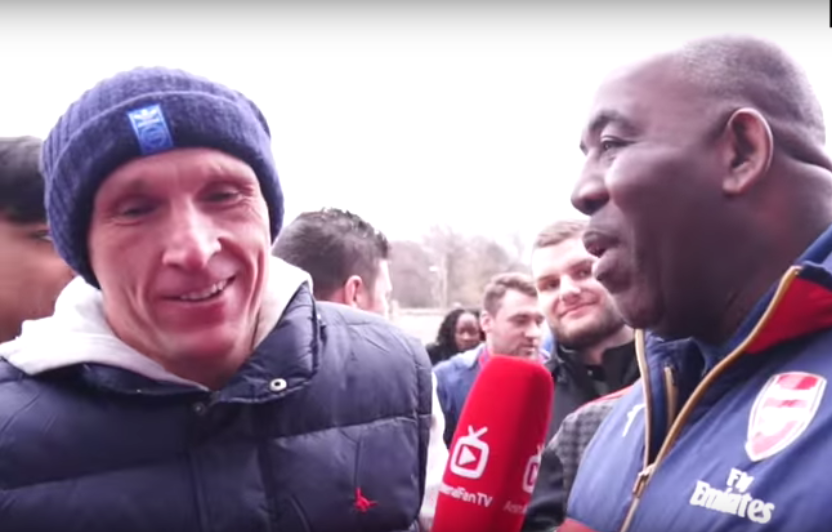 In his ongoing effort to be loathed by as many people as possible, chinchilla rancher Stan Kroenke has been hard at work alienating the fanbase of his English football team, Arsenal F.C. Last week the North London team lost at home to Watford (once owned by Elton John) in the FA Cup and then crashed out of the Champions League, only to rack up a win against Everton on Saturday in Premiere League play.

You'd think fans would take some solace in that vital win, which was only the team’s third in the last ten games and kept them in third place in the standings. You'd be wrong, though. Instead the Gunners' faithful home crowd sang  "Stan Kroenke Get Out of Our Club," because they're well and truly fed-up with the way Kroenke runs their team.

Their bile has a lot to do with Stan's habit of siphoning money out of the club under the guise of "consulting fees." Without delving too deeply into the financial intricacies of English football, the most successful teams rely on regular cash infusions to buy hot-shot players in the transfer market and pay them huge piles of cash. There's no salary cap or luxury tax, so teams are free to spend what the owner is willing to lay out in order to acquire and keep the best players.

And since Kroenke bought into Arsenal’s team ownership in 2007, that hasn’t been happening. In the past nine years, fans have watched as Kroenke takes money out and the team has slid down the table — and to the English fan, there is a cause-and-effect action at work there.

Now, Arsenal fans are insufferable assholes — the British equivalent of Yankee fans. Their team has been great forever, and they expect to always be great. They deserve to suffer under Stan's greedy, wrong-headed leadership, just to see how the rest of us live.

But beyond Arsenal fans’ frustration with losing, there's a cultural difference Stan either doesn't understand or doesn't care to understand. English fans won't accept the team making money if a certain amount isn't then spent on further developing a winning team. That's a foreign concept to the man who bought an American football team and then hired Jeff Fisher, who sports a dreadfully mediocre .520 career record as head coach, to lead it.

It's so bad for Arsenal fans right now that one of them told a reporter that Harry Kane is more popular than Stan Kroenke. Kane plays for Arsenal's arch-rivals, Tottenham Hotspur. If you translate that back to American English, that's like saying that former St. Louis Cardinal and new Chicago Cub Jason Heyward is more popular at Busch Stadium than Stan Kroenke — which Heyward undoubtedly is.


But hey, Arsenal fans, at least you're not suffering alone. Stank's professional lacrosse team, the Colorado Mammoth also haven't sniffed a title since 2004 — care to guess what year he bought them?

See also: Fuck You, Stan Kroenke, and the Toupee You Rode in Under