Donald Trump Hasn't Even Started Speaking, and His St. Louis Rally Is Already Getting Ugly 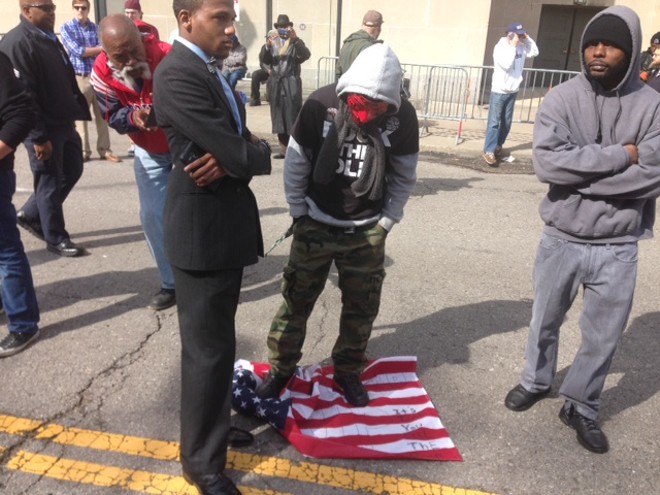 Update at 1:44 p.m.: Protesters Just Shut Down the Donald Trump Rally for a Full 10 Minutes

A seemingly endless line has formed in downtown St. Louis, with protesters and partisans alike trying to get into the Donald Trump rally at the Peabody Opera House. Since it only has a capacity of 3,100 souls, and the line was already around the block by 8 a.m., we imagine a lot of people aren't getting in.

Naturally, the clashes are already beginning. Our intrepid man on the scene, Daniel Hill, just sent over this video. If you're at work, turn the sound down before you hit play — democracy at work these days apparently involves a lot of F-bombs.


Hill tells us that he witnessed the guy wearing the Fuck the Police shirt and mask (depicted above) drop an American flag on the ground. He then trampled it and dragged it. Unsurprisingly, the Trump crowd got very angry.

Oh, and if you thought that was bad, just wait til you get a load of what's going on inside ....

Here's a shot of some Trump paraphenalia from outside the Opera House. Hmmm.

And here's the view a little before noon from the steps of the opera house, as a long queue patiently waits in hopes of getting in.