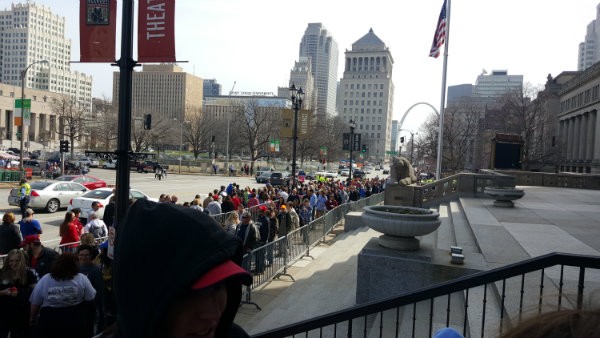 Say what you will about St. Louis, but these days we are not known for our football. The Rams have unceremoniously departed for West Coast pastures, and the University of Missouri Tigers had such a tough year, it was probably a blessed relief for people who follow the program when everyone started talking about racial tension at the school rather than performance on the field.

Which is why we were so amused by the opening of Donald Trump's remarks at his speech at the Peabody Opera House today. The Republican front-runner began by praising our football.

Here's the football-related riff in Der Drumpf's opening monologue, in all its incoherent glory.

"Missouri. Good football teams. Those college teams are good, eh? What are you going to do this year — I think pretty good stuff, huh? Came from nowhere."

By this point, the crowd has gone awkwardly quiet. Trump continues: "I'll tell you what, good. You vote a big one for me, I'm coming to one of those games."

Did an aide forget to give him the right set of notes or something? Is he talking about Kansas City? Or some team in the failed USFL that he tried to start a few decades back?

He surely can't be talking about the Missouri team that went 5-7, and 1-7 within the SEC? The same football team that, we must suspect, Donald Trump would not be remotely interested in supporting, as a matter of politics?

We'll admit to being seriously biased against the guy, but we're pretty confused right now.