Hillary Clinton Is Speaking in St. Louis This Saturday 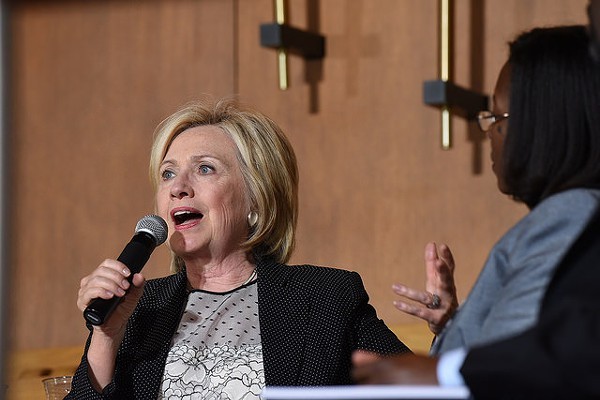 The lurching machinery of the presidential campaign season is suddenly lavishing Missouri with attention — and that now includes a just-announced stop for Democrat Hillary Clinton, who is hoping to woo voters before the March 15 primary.

On Saturday, Clinton will be appearing at 11 a.m. at the Nelson-Mulligan Carpenters' Training Center, located at 8300 Valcour Avenue. According to a press release, the former U.S. Senator and Secretary of State will talk about her plans to create a “new bargain” to create more good-paying jobs in Americans.

The event is public, but you'll have to RSVP to attend. Doors open at 9 a.m.

Clinton's visit follows a whirlwind of recent campaign action in the St. Louis region. Last week, U.S. Senator Bernie Sanders spoke to an over-capacity crowd on the Southern Illinois University campus in Edwardsville. Donald Trump — a guy we don't particularly care for — is scheduled to appear tomorrow in downtown St. Louis to waggle his face-meat in front of a microphone for a bit. Also, Ted Cruz will be in Maryland Heights on Saturday night, but a ticket will set you back $45.